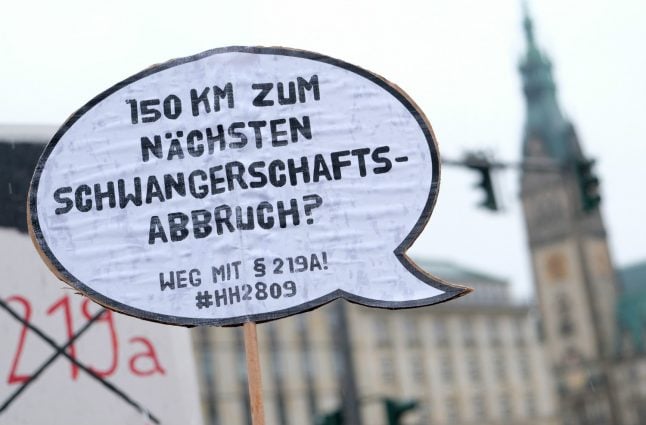 A sign that reads: '150km to the next abortion? Away with paragraph 219a' in Hamburg during nationwide demonstrations on January 26th. Photo: DPA

Why is abortion in the news?

Germany is proposing to soften paragraph 219a which makes it a crime for doctors to ‘advertise’ abortions and share information on terminating unwanted pregnancies.

The debate over this law, which was introduced in 1933 after Hitler assumed full powers of Nazi Germany, has become one of Germany's most controversial political battlegrounds. Germany is the only country among its Western European neighbours that imposes such a restriction.

Pro-choice campaigners want to completely abolish 219a because they say women should have access to information so they can safely find a doctor and know what to expect during the procedure. They believe Germany is behind the times, especially following recent developments in other countries, such as Ireland, which last year voted through a referendum to legalize abortion.

But others, including many conservative politicians, want to keep the ban in place. Some people, such as pro-life campaigners, are against abortion completely and would prefer stricter laws.

The compromise agreed by the coalition government, led by the centre-right Christian Democrats (CDU) and centre-left Social Democrats (SPD), has been viewed as a step forward for women by some, including SPD leader Andrea Nahles. But others have raised concerns about it.

Although the details are not fully clear, what the coalition is proposing to do is relax the ban and make it legal for doctors to say that they carry out abortions.

Doctors and clinics can include the word ‘Schwangerschaftsabbruch’ (abortion) on their websites, for example, but they wouldn’t be able to provide more information.

In the case of Kristina Hänel, the Gießen (near Frankfurt) doctor who was fined €6,000 after a court found her guilty of making it clear on her practice website that she performed abortions, her actions would still be illegal under the proposed changes. Campaigners in Hamburg hold a sign that reads: 'self-determined womb' during nationwide protests against paragraph 219a on January 26th. Photo: DPA

Dennis Koch, who works with Hänel, told The Local: “Kristina Hänel’s homepage would remain illegal because she provides additional information.” Hänel’s website allows people to submit their email address so that extra information can be sent to them.

Koch says it’s useful for women to know what they can expect from the procedure at the doctor's office and what kind of clothes they should wear, for example.

“In my eyes this is nothing illegal or bad, and it’s not something that promotes abortions, it’s only facts and things you have to bring to the specific doctor’s office,” Koch added.

The draft bill would instead allow federal health authorities and the German Medical Association to publish nationwide lists of doctors who perform abortions. Unlike doctors or clinics, the association would be allowed to provide further information.

Additionally, the age limit for women entitled to free contraceptives will be raised from 20 to 22 years. It's currently not covered by health insurance for women above that age. Training on performing abortions is also likely to be expanded for medical students although there is no indication of what will change yet.

Kate Cahoon, a volunteer for the pro-choice advocacy group, Alliance for Sexual Self-determination, said increasing the age women can receive free contraceptives has “no direct link” to abortion laws and distracts from the issue.

“The majority of women who have abortions are over 25,” she told The Local.

How do women dealing with an unwanted pregnancy find out what they can do about it then?

Not easily. According to those who work with affected women, in some areas of Germany there’s a blackout of information.

In Germany, all abortion is covered by the criminal code, under section 218, but women can terminate an unwanted pregnancy in the first 12 weeks if they follow strict rules, such as having mandatory counselling. After this point abortions can be legal in certain circumstances, such as when the health of the mother is at risk.

It’s also important to note that excluding special circumstances – such as a pregnancy that threatens the life of the mother, or one arising from rape – abortion is not a procedure that is reimbursable by health insurance.

“In parts of Bavaria there’s only one doctor who’s practicing abortion because abortion isn’t part of the curriculum for medical students,” said Cahoon. That results in women having to travel long distances to get access to the procedure.

“We also know of women who have difficulties finding neutral counselling – they’ve ended up at one of the Catholic counselling services that doesn’t hand out the certificate.” Women need this to be able to go to a doctor and get an abortion to prove they’ve had counselling. It’s also sometimes referred to as a Beratungsschein – advice certificate.

Cahoon said the pro-choice alliance also knows of cases where women have been given outdated lists of doctors by state governments.

“The doctors who are supposed to carry out abortions have already retired,” Cahoon said. This can leave women with no idea who to turn to.

Germany records an average of 100,000 abortions for 790,000 births, about half the rate of neighbouring France.

Why do authorities see doctors providing information on abortion as ‘advertising’ the medical procedure?

Pro-choice campaigners argue that the current abortion laws are in place because authorities in Germany refuse to trust women to make an informed choice. A woman in Hamburg holds a sign during nationwide demonstrations against paragraph 219a on January 26th. Photo: DPA

The implication is that if a woman carrying a baby saw an ‘advert’ for abortion she might go ahead and book one in, even if she wasn’t considering ending the pregnancy in the first place.

Koch said: “From a feminist point of view it’s simply wrong to imply that women will be influenced by any kind of advertisement to get an abortion when they would like to keep the child. The idea is horrible.

This also raises the question of what is advertisement and what is information. Koch said practical information like advising the patient to wear warm socks on the day of her abortion is classed as illegal. And this would still be classed as breaking the law under the amendments, even though it doesn't appear to be an advert.

Anti-abortion activists argue that abortion is not like any other medical procedure and shouldn't be treated as such. That's why women must go to counselling, for example, before being allowed to access abortion. They believe doctors saying they carry out abortions on a website is promoting it.

Are the proposed changes a step forward for women?

Reaction to the plans has been split. Those who want to see the paragraph abolished say the changes do not go far enough.

Cahoon told The Local she felt it didn't appear to be “real improvement” and that some people are concerned it could make things worse. That’s because it proposes to spell out what doctors can’t do in more detail and at the moment it’s more vague.

“The proposed amendment might actually make it more restrictive for doctors. we’re very concerned about that,” she said. “The only way that we can really address the situation is by abolishing the law.”

Koch, meanwhile, said the changes could be a “very small step” but also raised concerns about the situation becoming worse.

What do politicians say?

Strict Catholic Kramp-Karrenbauer, who has spoken out about keeping the law in place, said after a meeting with Söder that the parties must ensure the advertising ban on abortions is not abolished “through the back door,” indicating how strongly the Union wants to avoid getting rid of 219a. Söder added that the agreed compromise would be “thoroughly reviewed”. He hoped that the draft would meet the Union's expectations. “If that is the case, then that's fine. And if not, then we have to talk about it again,” he said.

Deputy leader of the Union parliamentary group, Nadine Schön, welcomed the draft agreement. “It is important to us as the CDU/CSU that the doctor merely informs us that he is carrying out such a measure,” she said. “Further information is reserved for the competent independent bodies.”

Marcus Weinberg, the parliamentary group's spokesman on family policy, also said that the draft bill was an “overall successful compromise”.

The opposition has a different opinion.

Green Party leader Annalena Baerbock criticized on Twitter that the bill “continues to breath distrust” towards women and doctors.

“The Green party's benchmark is help for women and legal clarity for doctors,” she said. “Those who want that should delete paragraph 219a. Clear and simple.”

The changes aren’t set in stone, and there may even be amendments to the proposal.

However, it looks likely that this is the road Germany will go down rather than getting rid of paragraph 219a any time soon. The draft is expected to be approved by the cabinet on February 6th and then pass both houses of parliament.

But pro-choice campaigners said they will continue to put pressure on the government. It follows the first nationwide day of action that took place on Saturday, where thousands of people demonstrated across 30 cities in Germany to stand against paragraph 219a and the coalition's compromise.

There is still a huge stigma attached to abortion so many people have been signalling their support to pro-choice groups like the Alliance through email rather than on the street, Cahoon said.

She added: “There’s a really wide consensus across the population that 219 does need to be abolished.

“So I definitely hope people won’t be fooled by the fake compromise and will make their voices heard.”

Koch said Hänel and other campaigners would keep up the fight. He said their office has already had dozens of emails from concerned people wishing to support the campaign.

“Our general recommendation is talk to the politicians, send them letters, make them aware of the problem,” he said.

Groups such as the Alliance for Sexual Self-determination also want to reform abortion laws in Germany so that they are decriminalized. Although their current focus is on abolishing 219a, they believe Germany's attitude to abortion in general is behind the times, especially after social movements in other countries.

“As you can see by the conservative party in parliament, they’re very keen to emphasize that there needs to be some kind of criminal provision for protecting the right to life,” said Cahoon. “I think, given international developments in Ireland, in Canada and other countries, it’s really clear they’re not with the times.”