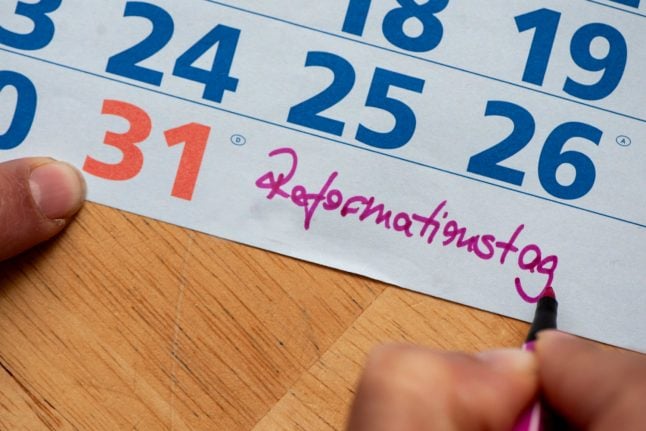 Reformation Day is a public holiday in some states and takes place on October 31st. Photo: DPA
Berlin is another step closer to receiving an extra public holiday – and it's one that will honour women.
A joint proposal by the coalition factions of the Social Democrats (SPD), the Left (Die Linke), and the Greens passed the Berlin House of Representatives at a first reading on Thursday and was referred to the interior committee. The final vote will take place on January 24th, reported BILD on Monday.
As early as 2019, Berliners could be given a day off work on March 8th.
Not everyone is in agreement with the move. Members of the centre-right Christian Democrats said that surveys showed Berliners would prefer a Christian holiday, while the far-right Alternative for Germany (AfD) party said a referendum should be held on the issue.
However, Katina Schubert, of the Left party, said making Women's Day a legal holiday “takes structural discrimination against women into account” and signals international solidarity with all women. Many Berliners feel that the introduction of an extra Feiertag is long overdue. Each of the 16 German states set their own public holidays and the capital has some of the fewest.

While Bavarians have 13 days off throughout the year (in reality fewer, as some always fall on the weekend), Berliners only have nine.

We detail public holidays in Germany below, as well as how you can make the most of your time off.

How many holidays do you get?

However, in practice, most employers grant more paid vacation days; between 27 and 30 days' paid holiday are common for full-time staff.

There are also a range of public holidays – or Feiertage – many of which range from state to state in Germany.

SEE ALSO: Vacation days in Germany: What to know about your rights as an employee

Many Germans take the Brückentage or Fenstertage (bridge days or window days) off. These are the days that lie between the public holiday and the days that you get off usually (for example the weekend), and make the holiday longer. Typical bridge days lie between Christmas and New Year or the Friday after Ascension Day,

These days might be booked off quickly by your colleagues so make sure you don't delay in asking your boss for time off then if you want it.

On bridge days, many production plants or factories close normal service and use the time for repair and maintenance work on machines.

You'll find that public transport is often not so busy on the in-between days around a public holiday.

Don't shy away from booking time off in Germany. Holidays and relaxation time are taken very seriously.

There isn't a culture of staying at work as long as possible during the day after you've officially finished, and not taking annual leave because you want to impress your boss. This behaviour is frowned upon in the Bundesrepublik, with companies encouraging staff to take their time off.

In February IG Metall, Germany’s biggest trade union representing metal and engineering workers, struck a deal that allows industrial employees the right to work a reduced week – 28 hours, instead of 35 – for up to two years in order to care for their families.

The agreement was described as a “milestone on the way to a modern, self-determined world of work,” by IG Metall leader Jörg Hofmann.

This deal helps paint the picture that although work is important, Germans also truly value their lives outside the office.

Except for German Reunification Day, public holidays are determined by federal states. However, this year there are nine national public holidays that apply to every state on the same dates. On top of that, each region has its own holidays (although it differs from state to state, with some regions having much less than others.)

It should be noted that in Germany, holidays that fall on a weekend are, unfortunately, not observed on a weekday instead.

SEE ALSO: The 10 most interesting cities to visit in 2019

Remember to think about school holidays, which may differ from state to state, when you're booking trips away.  The common break times for schools throughout the states and the months they usually take place are: Winter (February), Ostern/Früjahr (April), Himmelfahrt/Pfingsten (May/June), Sommer (June-August), Herbst (October) and Weihnachten (December). The new year is a time to think about your priorities. Photo: DPA

As New Year's Day fell on a Tuesday it was a good start to the year, giving workers the time off. Sadly, Epiphany on January 6th, which is a Feiertag in some states, fell on a Sunday meaning 9-5 workers missed out on it.

This year, the Christmas days off both fall on weekdays so workers can take the bridge days around them off to make the most of the holiday time.

It should be noted that some firms will also give full days or half days off to staff on December 24th and December 31st but that depends on the company.

Now here's a breakdown of the additional holidays across states in Germany this year:

Sadly this fell on a weekend day so 9-5 workers did not receive a day off.

This day isn't 100 percent confirmed but as we've explained above, it's looking likely that Berliners will be given this day as a holiday.