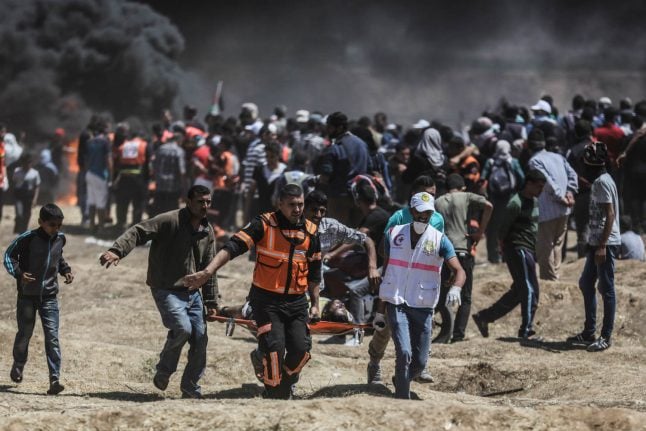 Israeli soldiers shot and killed at least 58 demonstrators and injured thousands more on Monday as Palestinians tried to storm the border fence separating Gaza and Israel en masse. Most of the protesters were unarmed, though some hurled stones at Israelis and the Israeli military said that some in the crowd were planting explosives.

The bloodshed has sparked horror around the world, so The Local asked foreign policy experts how Germany would react.

Internationally, reactions were determined largely by politics. Turkish president Reccep Tayip Erdogan accused Israel of “genocide”. On the other hand, US President Donald Trump said Monday was “a big day for Israel. Congratulations!” He made no reference to the dozens killed and was likely commenting on the controversial relocation of the US Embassy to Jerusalem.

In Germany, the relationship with Israel has a special meaning due to Germany’s responsibility for the deaths of millions of Jews during the Holocaust.

Chancellor Angela Merkel said in 2008 that every German leader was “duty bound to Germany's special historical responsibility for Israel's security”. Germany agreed to pay reparations to victims of the Nazis in the early 1950s, and in 1965 the two countries finally established diplomatic relations.

Ties have occasionally been fraught since then. For example, when Palestinians terrorists – who had ties to the left-wing German terrorist group the RAF – killed 11 Israeli athletes at the 1972 Munich Olympics, there were accusations in Israel that German security had been too soft.

But especially since the 1990s, Germany and Israel have built a strong relationship. Over 30,000 Israelis became German citizens between 2000-2015. Just last month a large group of Berliners gathered to show solidarity with an Israeli man who was attacked on the street for wearing a kippa.

Could the killings in Gaza test the durability of the relationship?

A German Foreign Ministry spokeswoman delivered a sharp statement on Monday: she acknowledged Israel’s right to defend itself, but urged “proportionality”, and said “live ammunition is only to be used when other, weaker methods of deterrence do not achieve the goal.”

And on Tuesday, Germany signalled its support for an independent probe into the deadly violence on the Israel-Gaza border, after the United States blocked a UN Security Council statement calling for such an investigation.

While the Israeli government certainly won’t be happy to see Berlin calling for an investigation into the Israeli military’s actions, experts say it’s important to keep this disagreement in context.

“Germany’s close relationship to Israel is a result of Germany’s past,” says Dr. Alexander Brakel, the Konrad Adenauer Foundation’s representative in Israel. “And nothing will change there. There are already serious differences of opinion… with regard to a Palestinian state… that’s why the German government criticizes Israeli building of settlements”.

For Brakel, then, Berlin’s support for an independent probe into the killings in Gaza is more of a piece with previous German criticisms of a friendly partner than the sign of a sea change in the relationship.

As the Palestine expert Marc Frings (also of the Adenauer Foundation) points out, Germany publicly supported a 2016 UN resolution describing Israel’s settlement activity as a “flagrant violation” of international law.

Indeed, while Germany has admonished Israel for the deaths in Gaza, the German government’s top spokesman also made sure on Tuesday to blame Hamas, the militant Islamist group that rules Gaza, for causing an “escalation of violence”.

Israel’s former ambassador to Germany, Shimon Stein, agreed that the deaths in Gaza were unlikely to have “a lasting impact” on German-Israeli relations, which have “come a long way over 70 years” and are now “more mature” with strong links between the respective civil societies. Probably the biggest worry is that “questions of remembrance” could come up as time passes, he told The Local.

Dr. Brakel did say that the German government would be forced to re-evaluate its close ties with Israel if the latter annexes a key zone of the West Bank generally considered part of a future Palestine. Claiming that land for Israel would make a two-state solution to the Israel-Palestine conflict impossible.

Nevertheless, for historical reasons Germany is unlikely to be the country to take a lead role in bringing about a “clear change” in the relationship. Rather, the EU would take the lead and Germany would agree. The EU is a major source of humanitarian aid for the long-suffering people of the Palestinian territories: it pledged an additional €42.5 million in January after the Trump administration reduced its support for the Palestinian people.

Frings called the situation in Gaza a “human disaster”. German-Israeli relations, too, are marked by a human catastrophe and the weight of history.

Correction: this article originally stated that Germany voted for a 2016 UN resolution on Israeli settlements. In fact they publicly supported the resolution.