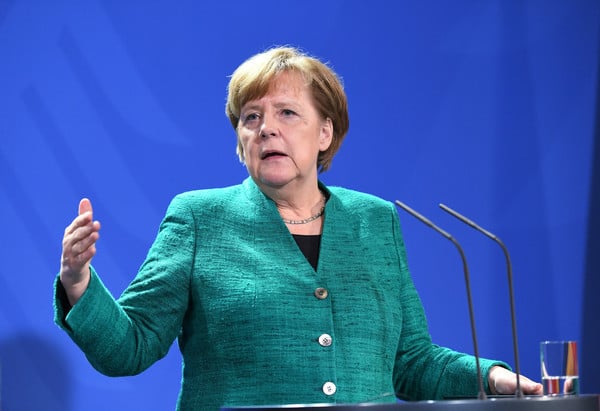 Photo: DPA
In a vote expected to be tight, the more than 460,000 members of the deeply divided centre-left SPD will cast their ballots on a plan to enter a new coalition as junior partners to Merkel's conservatives.
The vote, which starts on Tuesday, comes as the 153-year-old labour party's ratings are in freefall, with latest polls giving it just 16 percent support — only one point ahead of the far-right Alternative for Germany (AfD).
If the SPD rank-and-file give the thumbs up in the results to be announced on March 4th, veteran leader Merkel will likely launch her fourth-term government by late March. If they vote no, Germans will probably head back to the polls for snap
elections, prolonging the political limbo in Europe's biggest economy and threatening the end of Merkel's 12-year reign.
A tense SPD leadership hopes that the restive party troops will back their plans for a new “grand coalition”, dubbed “GroKo”, despite deep-seated fears the party will suffer further in the shadow of Merkel.
Polls now suggest two-thirds of SPD voters support another right-left alliance, but the mood of active party members is hard to gauge.
#NoGroKo
Both camps are set to criss-cross the country from Saturday, when the SPD's designated next leader Andrea Nahles and caretaker chief Olaf Scholz will speak in the northern city of Hamburg.
Few dare make any predictions about the ballot given the volatile mood in the party, which scored a historic low of 20.5 percent in the September elections and has been ruptured by harsh infighting.
The party's youth and left wings are driving a concerted #NoGroKo campaign, backed by some regional chapters. They argue that the party must recover and rebuild in opposition — which would force Merkel to opt for a minority government or face new elections — rather than betray its cherished ideals in another grab for power.
“If we're scared of new elections, we may as well close up shop,” argues youth wing leader Kevin Kuehnert, 28.
The SPD's credibility and electoral fortunes have been badly bruised by a series of U-turns, which on Tuesday saw election loser Martin Schulz glumly resign as leader after less than a year in the post.
Schulz, the third candidate in a row defeated by Merkel, had declared minutes after the election debacle that he would take the party into opposition to rebuild its combative spirit. However, he later reversed that decision when Merkel's initial attempts to form a separate alliance with two smaller parties failed.
SEE ALSO: Hero to 'loser': the broken promises of SPD leader Schulz
In arduous negotiations, Schulz's team managed to wrest some policy pledges, and the foreign, finance and other crucial cabinet posts, from Merkel's conservatives. However, his subsequent grab for the post of top diplomat, after he had earlier ruled out personally serving in a Merkel cabinet, was seen as one broken promise too many and sparked a party outcry.
'Heal wounds'
Schulz said he hoped that “time will heal the wounds” as he stepped down, and announced that Nahles would soon take over.
As the party tries to recover from the damaging turmoil, Kuehnert is pushing on with a passionate campaign to torpedo the GroKo deal. His Jusos (Young Socialists) organisation has controversially urged voters to join the party with the sole purpose of preventing another Merkel power pact, arguing that any common ground the two big parties once had has been used up.
The ballot-box pain of Germany's two mainstream parties was in large part a result of the rise of the anti-Islam AfD. Railing against a mass influx of refugees that peaked in 2015 under the previous GroKo, the populists won almost 13 percent of the vote with their Germany-first rhetoric and angry demand that “Merkel must go”.
If the SPD referendum fails, both major parties fear the likely result will be fresh elections and a further boost for the AfD.
By AFP's Frank Zeller and Yannick Pasquet