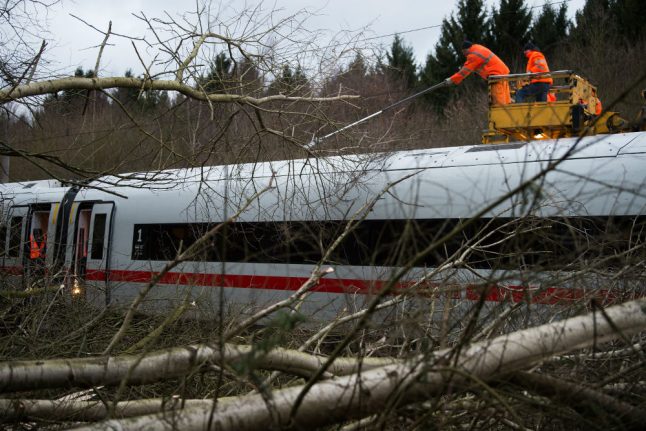 On two occasions over the past half year trains have been cancelled across much of Germany, after hurricane force storms swept across the country. The storms blew trees onto train tracks leading DB to cancel services.

Stranded passengers were forced to sleep at train stations overnight. Many stood for hours in front of Deutsche Bahn info centres on the day following the storms, waiting to find out when they could get to their destination.

People The Local spoke to at the time were mainly patient, resigning themselves to the fact that a storm was one of those facts of life that a rail company couldn't predict.

Martin f/ Bielefeld is in good spirits despite the possibility he may not make it home from Berlin today. @TheLocalGermany #DeutscheBahn pic.twitter.com/mTM0FCf6fP

DB was happy to encourage the idea that it was as much a victim of the storms as customers were, laying the blame on climate change.

“Extreme weather conditions have had an increasing impact on the rail system in recent years,” the company said. “Researchers are in agreement that extreme weather is becoming more common due to global warming.”

But a Spiegel report on Thursday claimed that Deutsche Bahn had twisted the truth about climate change in order to extract itself from responsibility for the travel chaos.

“Climate data from Germany, Scandinavia, Austria and Switzerland neither shows an increase in storms in northwest Europe, nor does it show that winds are now stronger than they were in the past,” Spiegel’s science editor Axel Bojanowski wrote.

Bojanowski explains that climatologists have actually predicted that storms will decrease in central Europe due to warming in the arctic region. In fact, he argues, blame for the cancellations can be directly attributed to Deutsche Bahn, which has allowed trees to grow right up next to rail tracks.

After storm Friederike hit Germany in January, leading DB to cancel trains across the entire country, the passenger organization Pro Bahn slammed the state-owned company for allowing tall trees to grow right next to the tracks.

“Trees should only be planted far away from the tracks,” Pro Bahn spokesman Karl-Peter Naumann told the Neue Osnabrücke Zeitung at the time. “It makes more sense to only plant bushes next to the tracks.”

Rail experts interviewed by Spiegel confirmed that DB had reduced the staff who care for foliage near its rail network in recent years in an attempt to cut costs.

Bahn to up infrastructure investment

Deutsche Bahn said Thursday it would sharply lift investment in its infrastructure this year, part of a years-long battle to make grumbling about delays history.

The company plans to spend a “record sum” of €9.3 billion on upgrading, repairing and extending tracks, stations, bridges and tunnels in 2018, infrastructure chief Ronald Pofalla said in a statement, an increase of 9.4 percent over last year's figure.

Among the headline projects are upgrades to major routes, such as stretches linking northern ports Bremen and Hamburg with cities further south, and two lines running across Germany's southeastern border with Austria.

Some 700 stations including hubs like western financial capital Frankfurt and Magdeburg in eastern Germany will also enjoy touch-ups worth a total of €1.2 billion.

Deutsche Bahn will hire 2,000 additional workers to tackle up to 800 work sites per day.

But the firm promised that it would adjust timetables to minimize disruption to passenger services – whose less-than-perfect punctuality is a popular butt for wisecracks.

Around one in four long-distance trains arrived more than five minutes late last year, in part owing to extensive engineering work, but also due to severe autumn storms and other unforeseen disruptions.

The coming years will see similarly high levels of rail investment in Germany, as renewals are due for large parts of its infrastructure.