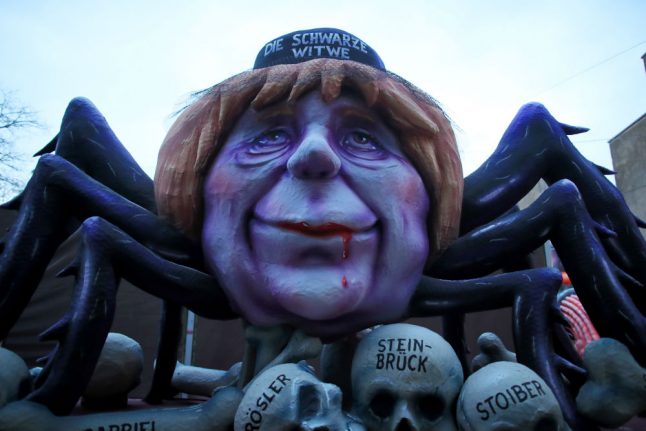 A float of Chancellor Angela Merkel in Düsseldorf. Photo: DPA

Rose Monday – widely known as the one event that’s not to be missed during Carnival festivities – will once again feature satirical floats that mock the political establishment of the day.

The floats will parade through the city centres in major cities of the Rhine region as they do each year, with the biggest parades set to take place in Cologne, Düsseldorf and Mainz,

Chancellor Angela Merkel and President Donald Trump will once more be popular targets; last year in Düsseldorf, one of the central floats showed Trump apparently raping the Statue of Liberty.

Jacques Tilly, the sculptor behind last year’s float of Trump and well known in Germany for building the country’s most biting Carnival floats, told The Local: “We reflect global politics and this is why the images from our parade have a global impact.”

READ ALSO: ‘A real shitstorm’: meet the man who skewered Trump at Karneval 2017

This year a float with a Russian bear sitting on top of the US president will make its way through the procession in Düsseldorf. Another one depicts Merkel as a huge black spider surrounded by the bones of her defeated opponents.

A float of US President Donald Trump in Düsseldorf. Photo: DPA

“There were many strong negative reactions online,” Tilly said in regards to last year's Trump floats. “But you can't expect too much of a Carnival float,” he adds. “Its foremost purpose is to make a polemical point and shouldn't necessarily be taken at face value.”

The floats in Düsseldorf are considered particularly provocative compared to those in other German cities.

This year in Düsseldorf the first ever Jewish float will also be seen in the the city’s popular Rosenmontag parade.

The festivities kick off around noon on Monday and several hundred thousand revellers are expected.

In Cologne, where the largest Karneval celebrations in the country can be found, floats of Merkel and Trump – as well as British Prime Minister Theresa May – will be featured.

More than a million jesters are expected in the North Rhine-Westphalian city. Due to kick off in the morning, the colourful parade will contain around 10,000 participants. Lucky costumed visitors will be handed out 3,000 tonnes of sweets and 700,000 chocolate bars.

Meanwhile over half a million spectators are expected to attend the Rosenmontag parade in Mainz, Rhineland-Palatinate.

Down in the Swabian region in southern Germany, a more serious tradition called Fastnacht  distinguishes itself from the Rhenish version of Karneval.

On Monday and Tuesday in the town of Rottweil – Baden Württemberg’s oldest city – the Narrensprung (Fools’ Leap) procession is set to enchant several thousand spectators. Instead of floats, Narren (Fools) donning hand-carved wooden masks and costumes covered in goose feathers will dangle calf’s tails in people’s faces while growling and purring.

SEE ALSO: The difference between Fastnacht and Karneval