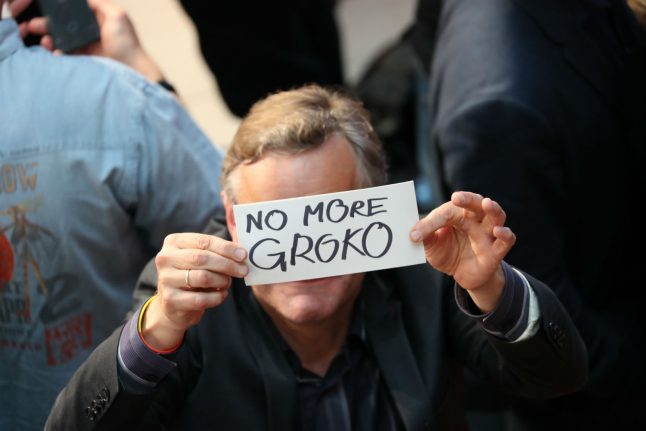 The term GroKo is shorthand for “grand coalition”, the mega-alliance of Chancellor Angela Merkel's conservatives and their own SPD labour party that has ruled Europe's top economy for the past four years.

Never. Again. GroKo,” read a pin-on button handed out by the party's youth wing at a fractious party congress in Berlin last week that was dominated by painful soul-searching over its worst election result in post-war history.

The blunt message was illustrated with a picture of two hands forming a diamond shape, Merkel's standard gesture in front of cameras, which has come to symbolise the veteran chancellor dubbed “Mutti”.

“We don't want a grand coalition,” said one member, Michelle Rauschholb, 25, who fears the SDP will be forced to “betray its ideals” if it has another stint as Merkel's junior partner.

Going into talks with Merkel this Wednesday, SPD chief Martin Schulz is deeply sceptical about another GroKo power pact, and aware much of his party base is openly hostile to another coalition.

But after months of post-election deadlock, Schulz has agreed to meet Merkel to sound out plans to give the partnership another lease of life, even though many Social Democrats fear it spells a mortal threat to their 150-year-old party.

The U-turn came after Schulz declared on the night of his September 24th election defeat that he would take the battered party into opposition rather than again play second fiddle to Merkel.

But he had to eat his words three weeks ago when Merkel's efforts to build an alternative alliance with two smaller parties collapsed and pressure rose on the SPD to avert political paralysis.

Schulz consented to “open-ended” talks that may or may not allow Merkel to lead another GroKo government from sometime in early 2018.

At the Berlin party congress, speaker after speaker argued passionately that to again govern under Merkel would further weaken the party's message and credibility.

The revolt was led by the party's youth wing, which collected reasons against a GroKo in messages stuck onto a white board.

“Political suicide,” read one, while another stated: “GroKo is the final nail in the coffin of Social Democracy.”

A third featured a drawing of a “GroKodile” with a gaping jaw about to swallow up a hapless SPD stickman.

One declared simply: “I already have a Mutti.”

The SPD leadership itself has been brutally honest after four election defeats in a row, stating in a discussion paper that “many voters are unclear about what the SPD stands for”.

It was a sobering admission for the traditional working class party that long battled for the rights of workers, women and minorities, and whose members start their speeches with “dear comrades”.

Now the SPD is struggling to reinvent itself in the age of vanishing factories, mines and dockyards and as robots and algorithms threaten to destroy ever more jobs.

“That's the big question that hovers above everything,” said youth wing leader Kevin Kühnert, 28. “In future who will be the SPD's voter base?”

At the congress, Kühnert vowed to push on with the #NoGroKo campaign when delegates and members get to vote on a potential coalition deal.

“The last GroKo was voted out when the two big parties between them lost 14 percentage points,” he told AFP. “That's certainly not a mandate for a new coalition.”

He argued that the SPD should instead seek to broadly support a Merkel minority government and then fight for key issues on a case by case basis.

Not just the young are up in arms – dismay runs through the rank-and-file, including Björn Steinborn, 47, a Berlin bank employee and SPD member since 1989.

“For us this isn't simply about power but about ideas that mean progress for our country, and I don't see how we can achieve that with a GroKo,” he said.

“The sad thing is that the other options, a minority government or new elections, aren't good either,” he said.

“We're finding ourselves in a situation where we're all a little bit lost.”