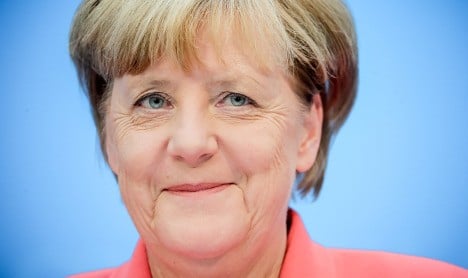 The battle over the make-up of Merkel's fourth government would potentially impact Berlin policy on everything from immigration and Russia relations to climate.

“The coalition building process will be more exciting than the vote itself because there are many possible coalitions,” political analyst Oskar Niedermayer said, adding that this “will pose difficulties”.

Merkel's conservative CDU/CSU bloc holds a double-digit poll lead, but it is short of an absolute majority that would allow it to rule alone.

Now all eyes are on the smaller parties.

Would Germany keep its right-left “grand coalition” of the past four years – where the junior partner is the centre-left Social Democratic Party (SPD) of Merkel challenger Martin Schulz?

Or could the chancellor team up with just one small party – either the liberal and pro-business Free Democrats (FDP), who plan a comeback after dismal results in 2013, or the left-leaning and ecologist Greens?

Or would she need both the FDP and Greens for what in Germany's colour-coded politics is called a “Jamaica coalition”, grouping the Caribbean country's national colours black (CDU), yellow (FDP) and, well, Green.

Timo Lochocki of the German Marshall Fund think-tank said it is unclear whether Merkel will need just one or two smaller parties to govern.

“Because the statistical error in the opinion polls is between 2.5 and 3 percent, Merkel's CDU could theoretically still get 41 percent and with that, it would only need one small party,” he told AFP.

As small parties are poised to make a big difference, undecided voters could drastically change the picture, Lochocki said, meaning the election “is way more volatile than it seems currently”.

A new grand coalition – known in German by the uncharming shortform GroKo for “Grosse Koalition” – would guarantee Merkel stability because of a crushing parliamentary majority.

But the SPD is lukewarm about staying on as Merkel's sidekick, a role that has damaged its voter appeal.

While both sides have been aligned on major policies, the SPD has seen support plunge as it has been unable to shine in “Mutti's” shadow.

Fears are also growing that the cosy centrist partnership, by depriving Germany of a real opposition, is driving disgruntled voters to the fringes.

For the first time, the right-wing populist and nationalist Alternative for Germany (AfD) is poised to clinch seats in the election, on the back of an Islamophobic and anti-migrant campaign.

The AfD is expected to be a pariah party in the Bundestag – all mainstream parties already shun the group – but some observers fear this will only help the party which sees itself as an anti-establishment force.

“If Merkel forms a new alliance with the SPD, there's a threat that over the next four years, the right will grow where the AfD is already proliferating wildly,” warned news weekly Die Zeit.

Most Germans now are lukewarm about another GroKo, with only 16.1 percent hoping for such a big-party lineup, a survey commissioned by Bild daily showed.

The most popular duo seems to be of the CDU/CSU and FDP, with the survey showing 18.4 percent in favour.

But current polls suggest that they would fall short of, or only narrowly reach, a majority – which means such a coalition risks instability.

The FDP is traditionally a natural fit for the conservative CDU, and its young and photogenic leader Christian Lindner won praise from Merkel's Bavarian allies CSU over his call for an “overhaul” of migration policy.

But the party may not benefit from an alliance as “it's going to be most tricky to tell their voters they are starting out as an anti-establishment party but then they join the government,” said Lochocki.

If, on the other hand, the Greens are needed for a “Jamaica” coalition, Germany could expect a quarrelsome government as the three parties have different visions on issues from eurozone integration to migration.

The FDP's tough migration policy and criticism of clean-power wind farms, for example, are jarring to the Greens.

The environmentalist party in turn would make uncomfortable bedfellows for the conservative CSU, protectors of Germany's scandal-tainted automobile sector.

“No-one with no-one, that seems to be the motto,” said the Spiegel weekly.

It added, however, that the parties' statements now are mostly tactical as campaign-mode politicians try to “drive up the price for their participation in any government”.