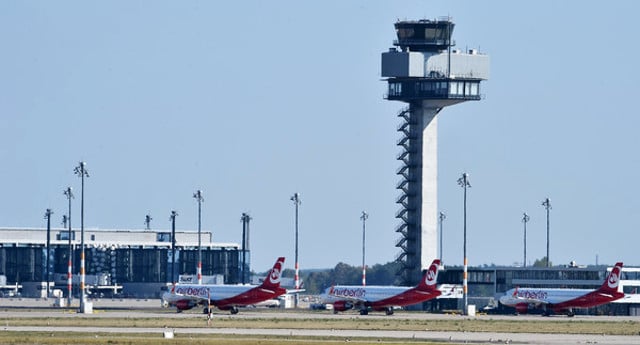 “Aside from Lufthansa, we are in contact with two other interested parties from the aviation industry,” Air Berlin chief executive Thomas Winkelmann told the Frankfurter Allgemeine Zeitung newspaper.

The negotiations have been going on for weeks, he said, and all three airlines were financially sound and large enough “to offer Air Berlin a secure future” while keeping Germany as an operations hub.

He did not name the other two airlines, but EasyJet has long been eyeing Air Berlin and German media have speculated that Thomas Cook subsidiary Condor is the third party.

Contacted by AFP, Condor said it stood ready to play “an active role” in the restructuring of Air Berlin. EasyJet declined to comment.

READ MORE: Five things you need to know after the Air Berlin insolvency

Air Berlin filed for insolvency on Tuesday after main shareholder Etihad Airways suddenly pulled the plug on years of financial support for the loss-making airline.

In a controversial move, the government stepped in with a €150 bridging loan to keep Germany's second-largest airline flying for the next three months, saying it did not want to leave holidaymakers stranded.

German flagship carrier Lufthansa is aiming to take over 90 of Air Berlin's 140 planes and operate them under its low-cost Eurowings brand, the Süddeutsche Zeitung reported, citing sources close to the talks.

The number includes the 38 aircraft Lufthansa is already leasing from Air Berlin, as well as the roughly 20 planes operated by Austrian subsidiary Niki, the newspaper said, adding that a deal could be sealed “in coming weeks”.

Speaking to the Frankfurter Allgemeine, Winkelmann said he aimed to reach agreements with at least two of the interested buyers in September, with Air Berlin's landing rights considered particularly valuable.

“But we won't be able to save all jobs,” the paper quoted Winkelmann as saying.

The airline, sometimes dubbed the “Mallorca shuttle” for its popularity with German tourists headed for Spanish beaches, employs some 8,000 people.

It has long battled for survival, booking losses amounting to €1.2 billion over the past two years and relying on cash infusions from Abu-Dhabi-based Etihad.

An Air Berlin spokesman told AFP the company could not immediately say when it would announce its first-half results, originally scheduled to be released on Friday.

But the government's intervention, just weeks before a September 24th general election, to keep Air Berlin flying for now has come in for criticism.

Low-cost rival Ryanair has lodged complaints with German and European competition regulators, slamming what it called a “conspiracy” between the government, Lufthansa and Air Berlin to carve up the insolvent carrier's assets.

Foreign Minister Sigmar Gabriel defended the move, saying the financial lifeline was needed to prevent 80,000 travellers a day from being stranded during the busy holiday period.

But a government official told the Handelsblatt financial daily the state aid was a clear example of electioneering.