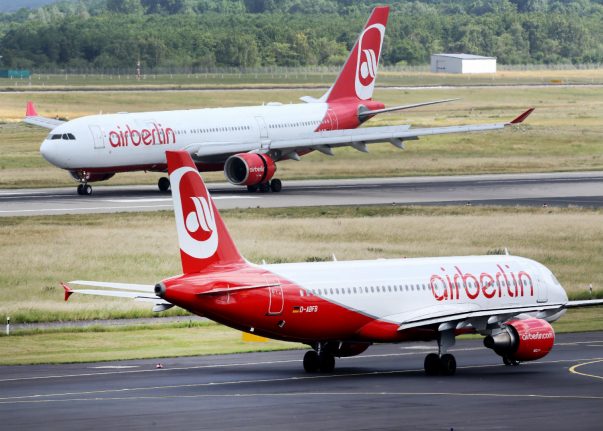 The German government said it was providing a bridging loan of €150 million to keep the airline flying at a time when many Germans are still on holiday.

MUST READ: Five things you need to know after the Air Berlin insolvency

German rival Lufthansa said in a separate announcement it was in talks with Air Berlin to take over parts of the group.

Air Berlin has long battled for survival, booking losses amounting to €1.2 billion over the past two years and relying on cash infusions from Etihad.

In a surprise announcement, the airline said it had filed for insolvency with the court of Berlin-Charlottenburg after Etihad “notified Air Berlin PLC of the fact that it will not provide any further financial support to the Air Berlin group”.

Etihad, which holds a 29.2 percent stake in Air Berlin, said that the development was “extremely disappointing” but that it could no longer justify further funding after providing an additional €250 million in April.

“Air Berlin's business has continued to deteriorate at an unprecedented rate, preventing it from overcoming its significant challenges,” the Abu Dhabi-based company said.

German Economy Minister Brigitte Zypries told a hastily assembled press conference that the government was assisting Air Berlin with a loan to prevent passengers from being stranded during the busy holiday season.

“To keep Air Berlin's flight operations going, the government has decided to grant a bridging loan for €150 million,” she told reporters.

The money should be enough to keep Germany's second-largest airline running “for three months”, she said, adding that flights would go ahead as scheduled and that new tickets could still be booked.

In a bid to turn the tide, the Berlin carrier embarked on an extensive restructuring plan last year that included leasing 38 aircraft with crew to Lufthansa and slashing 1,200 jobs – or one in seven of its workforce.

Amid the restructuring, it was hit by a series of flight cancellations and severe delays, leading to a flood of complaints.

Lufthansa said it was “already in negotiations with Air Berlin to take over parts of the Air Berlin Group and is exploring the possibility of hiring additional staff”.

Air Berlin said the talks with Lufthansa “and other partners” about acquiring its assets were already far advanced.

The insolvency proceedings mark the latest setback for Etihad, which has been struggling for years to make inroads in the European market through its Air Berlin and Alitalia subsidiaries, both battling heavy competition from low-cost competitors.

Alitalia, in which Etihad holds a 49 percent stake, went into administration in May after employees refused to accept job and salary cuts as part of a new rescue plan.

The Irish no-frills airline Ryanair, meanwhile, was sharply critical of the government support for Air Berlin, which it said paved the way for Lufthansa to acquire Air Berlin in what would amount to anti-competitive behaviour.

Travellers in Germany will suffer higher prices as a result of the “Lufthansa monopoly”, Ryanair spokesman Robin Kiely was quoted as telling the German news agency DPA.

On Germany's DAX index of leading firms, Lufthansa soared to the top of the leaders board, rising 4.73 percent to 20.59 euros at the close.

Shares in Air Berlin, not listed on the Dax, plunged more than 35 percent to 0.51 euros.

“This is a heavy blow for Air Berlin employees,” said Verdi board member Christine Behle.

“Our priority now is to secure jobs. Air Berlin must proceed with the utmost transparency and provide all necessary information.”

The pilots' union Cockpit said the Air Berlin news came as “a shock”.

It welcomed the government's help in minimising the disruption over the coming months, but it accused Etihad of making the wrong strategic and management decisions and turning its back on Air Berlin workers.

“Etihad is dropping Air Berlin like a hot potato,” it said.

Air Berlin said two members of its board of directors, who were nominated by Etihad, had resigned.