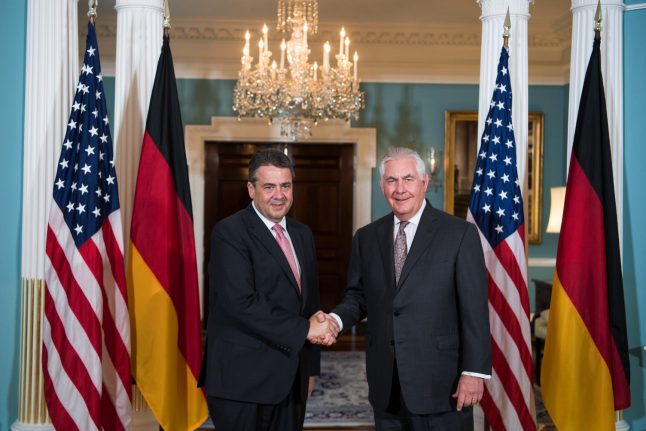 While visiting Washington for the second time in four months, Gabriel spoke with US Secretary of State Rex Tillerson about how the United States could use its influence in the current dispute between Germany and Turkey. Ankara blocked German MPs from visiting their own troops in Turkey this week after Germany granted asylum to military personnel, whom Ankara accuses of being involved in the failed coup last summer.

“I believe that the Americans will use their capabilities to speak about it with the Turkish side, that we must have a different relationship with one another than we currently do,” Gabriel said.

Turkish President Recep Tayyip Erdogan had visited the White House on Tuesday, and Chancellor Angela Merkel is set to meet with him amid a NATO summit in Brussels next week.

Germany has around 260 troops stationed at Incirlik air base in Turkey, who are engaged in reconnaissance missions in the international fight against Isis. Merkel said earlier this week that Germany is now looking into moving its troops elsewhere, with Jordan being the most favoured alternative.

Germany also has soldiers in the Turkish Konya air base, who are also involved in missions against Isis.

Gabriel and Tillerson further spoke about the Ukraine conflict and the Syrian war. The German minister had also visited the Washington Post, whose reports from anonymous sources alleging President Donald Trump divulged classified information to Russian diplomats is currently shaking up Washington.

But Gabriel said that when speaking with Tillerson, the reports about Trump were not an issue. The Foreign Minister further noted that the allegations against Trump would have no impact on the cooperation between US and German intelligence agencies, saying that their close collaboration is “absolutely necessary for the security of Germany and Europe”.

The German diplomat is on Thursday set to meet at the White House with National Security Advisor H.R. Raymond McMaster, who has been caught up in defending Trump against the media reports this week.