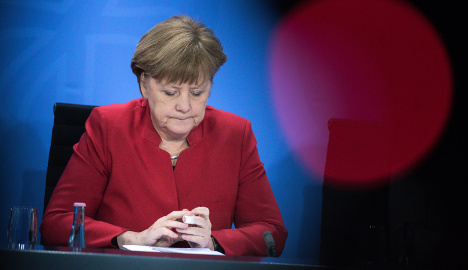 A poll by public broadcaster ARD and research group Infratest dimap published on Thursday evening showed that 45 percent of respondents said they were “satisfied” with her work.

This was the lowest level since August 2011, when she also fell to 45 percent. Last September's ARD poll showed that 63 percent of respondents were satisfied with the Chancellor.

But Merkel still managed to pull ahead of conservative ally Horst Seehofer, the leader of the Bavarian CSU (Christian Social Union), whose grumblings about her refugee policy have reportedly caused Merkel to stall her announcement about seeking another term as Chancellor.

Survey participants were also asked whether they would think it would be “good” or not if Merkel ran again for Chancellor. A little more than half (51 percent) said it would not be good, compared to 46 percent who said it would be.

The Chancellor herself has been tight-lipped so far on whether she will run.

The CDU and far-right, anti-immigration AfD (Alternative for Germany) were neck-and-neck at 22 percent in a poll by public broadcaster ZDF on Thursday. The SPD are expected to win the state, and gained 28 percent in the poll.

A separate survey on Wednesday by research group Insa showed that the AfD would actually surpass the CDU at 23 percent compared to 20 percent for the northeast region.

The AfD has profited from anti-immigrant sentiments that have surfaced in response to Merkel’s liberal policies that resulted in around one million refugees entering Germany to apply for asylum last year.

The ARD poll showed that nationally, the AfD gained two percentage points over August polls to reach 14 percent on September 1st. The CDU and CSU together reached 33 percent, followed by the SPD at 23 percent.

Merkel tried to reassure the CDU/CSU Union parliamentary group on Thursday that there would not be a repeat 2015’s number of refugees entering the country as an intense debate broke out about her policies.

But the leader of the Union fraction in the Bundestag Michael Grosse-Brömer told DPA that despite the AfD’s encroaching success, the conservative parties would not be overtaken by the AfD in Mecklenburg-Western Pomerania.

“The AfD is not a middle-class party, but rather a protest party,” he said.