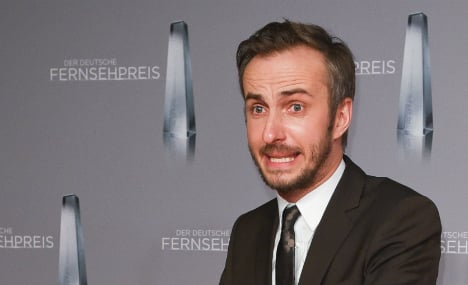 Broadcaster ZDF told reporters on Tuesday that Thursday's edition of Böhmermann's show Neo Magazin Royale had been cancelled because of “massive public pressure”.

Regional newspaper Rheinische Post reported that Böhmermann is now under police guard at his home in Cologne.

“We are evaluating the current situation and are in contact with the security services,” a Cologne police spokesman told the newspaper.

Earlier on Tuesday, Chancellor Angela Merkel faced accusations she had made a “big mistake” by failing to support Böhmermann's artistic freedom in the stand-off with Turkish President Recep Tayyip Erdogan.

“It was a big mistake that is hopefully causing her pain,” Oliver Welke, presenter of Friday-night satirical news show “heute show”, told Bild.

Germany's constitution guarantees “freedom of expression, academia and of course the arts,” Merkel emphasized in remarks on Tuesday.

“These values apply regardless of all the political problems that we discuss with each other. And that includes the issue of refugees,” the Chancellor said.

Merkel is accused of adding fuel to the flames of the clash by calling Böhmermann's work “deliberately insulting” in a phone call with Turkish Prime Minister Ahmet Davutoglu last week.

Critics have accused her of trying to placate the Turkish President's ego at Böhmermann's expense in order to keep alive a controversial refugee exchange deal with Ankara.

“The Chancellor alone has behaved badly in this affair,” satirist Welke said.

“You can't stay silent on the German ambassador being summoned over the Extra 3 case and then express yourself almost as Germany's top TV critic – that just isn't OK!” said the satirist.

The government is battling through a lose-lose situation where it risks appearing to undermine press freedom or endorsing a grave insult against a key foreign ally in Erdogan.

The Turkish government demanded that the song be taken offline and never broadcast again.

Instead, German comedians redoubled their attacks, with Böhmermann reading a “libellous poem” on air, saying that he wanted to show the Turkish leader what was really against the law in Germany.

Now Böhmermann could be prosecuted under a little-used German law that provides for those insulting foreign heads of state to be jailed for up to five years.

The government has said that it is “examining” demands from Turkey for Böhmermann to stand trial over the poem.

But prosecutors in Mainz also confirmed on Tuesday that the Turkish President had also complained of defamation in his capacity as a private person – meaning that a legal case could go ahead whether the German government agrees or not.