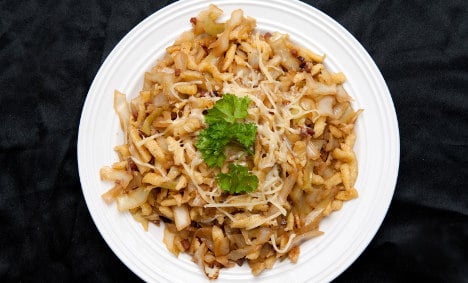 To learn more about Germany's vegetarian traditions, delve into our interview with Stevan Paul. But feel free to just let your mouth water over these delicious veggie recipes:

1. Spargelcremesuppe (Cream of asparagus soup) – Not for nothing is asparagus soup first on the list, as it's perhaps Germany's most famous vegetable (OK, OK, aside from sauerkraut).

Every year Germans go crazy for asparagus in the brief spring season when it appears. Recipes for this simple and classic German dish can be found everywhere online – with slight variations – but Paul's includes shallots for a little extra flavour. 2. Obatzter – This spread is a Bavarian classic to be enjoyed with Laugengebäck – baked goods sprayed with lye to give them a crusty exterior. Its mix of crème cheese, spices, onions and radishes is the perfect snack when spread on a pretzel or Laugenstange (a straight breadstick in the style of a pretzel).

3. Soleier (pickled eggs) – Don't imagine that German pickled eggs are anything like the gloomy things you might find lurking in a jar in a British pub. Paul recommends a whole raft of improvements – from pepper to onion – that will add to a complex, fresh flavour for the eggs even as they sit in their jar.

To enjoy your pickled eggs in the authentic German way, halve them, pop out the yolk and add mustard, oil and vineger into the hollow in the white before replacing the yolk. Delicious!

4. Wirtshaussalat (inn salad) – Paul notes that the humble Wirtshaussalat – a combination of grated carrot, sliced cucumber, green beans and cabbage – has suffered from an unjustly bad reputation because of the cheap versions available in low-quality restaurants. Using fresh ingredients and zesty spices when preparing your own at home will make sure you get the authentic, traditional experience.

5. Frankfurter Grüne Sauce mit Pellkartoffeln und Ei (Frankfurt green sauce with peeled potatoes and egg) – This mayonnaise sauce is rumoured to have been invented by Catharina Elisabeth, mother of Johann Wolfgang von Goethe – Germany's most renowned national author. Others point to its appearance in the Wilhelmine Rührig cookbook published in 1860.

However old the recipe is, these days most Frankfurt cooks will have their own version. Paul suggests that it makes a fine complement to asparagus or roast potatoes as well as the traditional egg and new potatoes. For authentic Frankfurt flavour, use traditional herbs bought at a local farmers' market.

6. Kartoffelpuffer (potato fritters) – These pan-fried potato cakes are loved all over Germany, known under all kinds of different names and eaten with all kinds of complements. In the Bergisches Land region of North Rhine-Westphalia, they're eaten on buttered black bread with sugar-beet syrup and coffee, while in Bavaria locals enjoy them with sauerkraut and beer.

But the most common version is simply serving them on a plate with apple compote for a sweet-and-savoury snack that's sure to get your tastebuds watering.

7. Käsespätzle (potato noodles with cheese) – Swabian Spätzle is one of the many German foods granted regional protection under European Union rules. It's synonymous with Swabia, a region that spans across the border between Bavaria and Baden-Württemberg.

Swabian housewives have always been renowned across Germany for their good housekeeping – and delicious cooking. Paul suggests serving this specialty with a tasty chicory and lamb's lettuce salad.

8. Gebratene Schupfnudeln mit kraut (fried egg noodles with cabbage) – these cousins of the Spätzle and gnocchi are another typically south German dish believed to have originated in Italy. It can often be found at annual markets and big festivals, being cooked in a large frying pan or wok. Paul suggests serving with cabbage and onions.

9. Kirschenmichel (cherry crumble) – Possibly closest to the British crumble or bread-and-butter pudding, this dish combines cherries with crumbled-up bread soaked in milk and eggs. Best served as a main dish with something light – like noodle soup – beforehand. Try different types of bread to get a different flavour – or add some cherry juice to boost the flavour.

10. Rote Grütze (red fruit jelly) – This time we head to north Germany for a simple dessert that's perfect for all year round. Just add a dollop of whipped cream or vanilla sauce for a delicious impromptu sweet treat.

Any kind of red fruit can be used – including the decidedly non-traditional cranberry. Varying the amount of corn starch can make the jelly any consistency from creamy to firm.