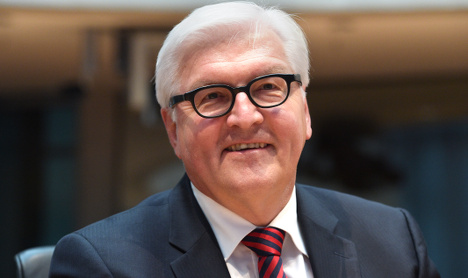 Steinmeier, who lost dismally in a 2009 campaign against Merkel, said the SPD would mount a challenge to her Christian Democrats at the next election despite the conservatives' double-digit lead in the polls.

“The SPD will enter the race with its own candidate,” he told the Bild am Sonntag newspaper.

“A party with a 150-year-old history will not just give up before the campaign has even begun.”

The SPD has ruled as junior partner in a left-right “grand coalition” with Merkel since 2013 and during her first term from 2005 to 2009.

Merkel has not said whether she would stand for a fourth term at the next poll, expected in two years' time, but she and her party enjoy strong support thanks largely to Germany's robust economic health.

An SPD state leader, Torsten Albig, stunned the German political scene last month when he suggested that his party might be better off campaigning to remain Merkel's junior partner rather than to replace her.

Merkel is “doing an excellent job”, Albig said, to the disbelief of many of his party colleagues.

SPD leader Sigmar Gabriel, who serves as Merkel's deputy chancellor and economy minister, said this month that he thought Merkel could be beaten in 2017 and that he was open to a party referendum to pick the challenger.

After a decade in power, Merkel is credited with steering Germany unscathed through years of economic crisis in Europe and occupying the centre ground in German politics, making mainstream opposition exceedingly difficult.