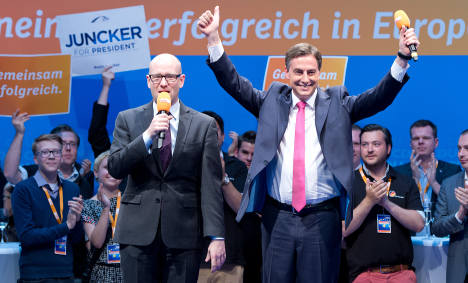 Merkel's Christian Democrats (CDU) and their Bavarian sister party the CSU – a team that last September celebrated a landslide win at the national level – between them secured 35.3 percent of votes cast.

The neo-Nazi National Democratic Party of Germany (NPD), won 300,000 votes, one percent of the total, and so wins its first seat in the 751-member European parliament.

The far-right party profited from a reform of Germany's electoral system, which removed a three percent threshold to gain seats.

And the removal of the three-percent hurdle also meant that the Animal Protection Party and a spoof party called Die Partei are set to win a seat each.

Die Partei’s leader Martin Sonneborn said: "I will spend the next four weeks in intensive preparation for my resignation."

The former editor of satirical magazine Titanic said his party follow a rotation principle. "We will try to resign once a month, so that we can smuggle 60 party members through the EU Parliament," he said. "So we'll be milking the EU like a small, southern European country."

The CDU-CSU result – though less triumphant than last year's 41.5 percent German election win, mainly because of CSU losses – was seen as another endorsement for Merkel, the only leader of a major EU member country to have weathered the fallout from the eurozone crisis.

The vote was also celebrated by Merkel's new partners in a left-right 'grand coalition' government, the Social Democrats (SPD), who won 27.3 percent of the vote, up from 20.8 percent at the last such EU vote in 2009 and translating into 27 seats.

Germany, the EU's most populous country, sends 96 members to the European legislature, which has demanded a bigger say in who takes over from outgoing European Commission president Jose Manuel Barroso.

At the European level, where Berlin's influence has been strong, "the results reflect a voter dissatisfaction with the current policy, especially when you look at the results in France, Britain and Greece," said Julian Rappold of the German Council on Foreign Relations.
He added however that "Merkel can be satisfied with the German result," even while "she will have mixed feelings tonight" given the rise of populist protest parties in Europe.
Political scientist Jens Walther of Düsseldorf University agreed that, in economically strong Germany, the result pointed at voters' "extreme satisfaction with the federal government" and said "compared to other countries, she (Merkel) had a very good result."
The CDU's top candidate David McAllister said: "We had a goal and we achieved that goal, we are the strongest force in this election, we clearly won. And Germany clearly voted in a pro-European way. This confirms our good policy for Europe."

Walther, the political analyst, called the SPD's result "an extraordinary success … their biggest gain in post-war history", although he stressed that the leap was up from a historic low.
Since teaming up with Merkel's party, the SPD has pushed social reforms including a national minimum wage in Germany. It also boasts among its ranks the European candidate for European Commission president, Martin Schulz.
Germany's SPD leader, Vice Chancellor Sigmar Gabriel, greeted the outcome at a joint appearance with Schulz, telling him: "We are super-proud that you are one of us."

Gabriel also praised the turnout of over 48 percent: "The people knew what this was about, and that's why they went out to vote: they wanted to decide for themselves who will be the next president of the European Commission." Schulz, until now president of the European Parliament, praised the electorate's "strong tailwind" for the SPD, saying the party "remains a flagship for democracy, tolerance, respect, equality".
The election also saw the debut of a new anti-euro party, the Alternative for Germany (AfD), which made its entry into the European Parliament with seven percent of the vote and seven seats.
The AfD celebrated the result as a popular endorsement of its demands, including Germany's return to the Deutschmark, the orderly dissolution of the euro common currency system, and the repatriation of many powers from Brussels to Berlin.
"The AfD in this election blossomed into a new people's party in Germany, as a liberal party, as a social party and as a value-oriented party," said its leader Bernd Lucke, an economics professor.

The Green party took third place with 10.7 percent, followed by the far-left Die Linke with 7.4 percent. The pro-business Free Democrats, once Merkel's governing allies, remained in the doldrums at 3.4 percent.

See how the night unfolded in our live election blog.