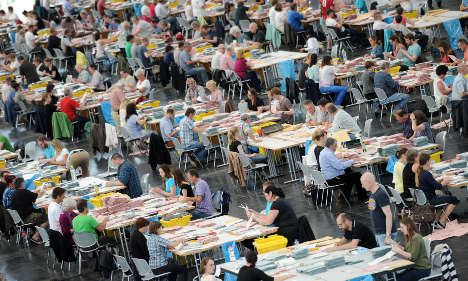 Merkel’s Bavarian allies, the Christian Social Union (CSU), were one of the main losers of the night, with their vote sinking by eight percent on the last EU elections in 2009.

It meant that Merkel’s CDU/CSU bloc recorded their worst ever result in an EU election with 35.8 percent – down from 37.9 percent in 2009.

But their parliamentary leader Volker Kauder remained upbeat. “We can live with this result,” he said.

The other major loser was the Liberal Party, the FDP, which also lost eight percent of their 2009 vote and sank to a low of just three percent.

The two winners were the Social Democrats (SPD), who got 27.2 percent, and the eurosceptic party, the AfD, who achieved 6.7 percent in their first EU elections. Elsewhere the Green Party saw their share of the vote sink slightly to 10.7 percent and the far-left party, Die Linke, repeated their 2009 result with just under eight percent, according to early projections from broadcasters ARD and ZDF.

It means that Germany’s 96 seats in the EU Parliament are set to be split as follows:

After the scrapping of the three-percent hurdle needed to get into the EU Parliament, Germany’s fringe parties are also expected to win seats. The neo-Nazi party, the NPD, as well as the Animal Protection Party and the Freie Wähler will each get a seat, according to the projections.

Stay up to date with the latest developments in our live election blog.