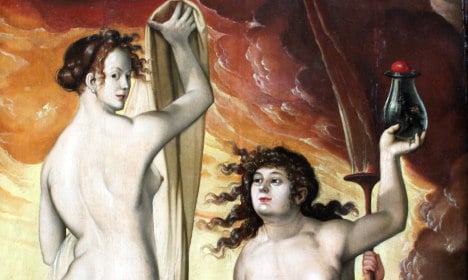 Two German witches up to no good. Photo: Wikimedia Commons

In the hills above the Bavarian village of Burgrain, a large group of students stands huddled around me. We’re in the ruins of what was once the castle of Werdenfels.

Torch stuck under my chin, I’m telling my young charges the gruesome tale of what transpired there some 400 years ago.

“Once the ‘witches’ had given in and confessed under torture, they were taken from the cells and put… well, I guess, right about where you’re standing… where more than 600 of them were burned alive!”

There’s a titter of nervous laughter and a few gasps. I’m hamming things up, but the tragic story of what happened to the women of this area – and indeed, women across Germany – across hundreds of years needs no embellishment to chill the blood.

When we think about hysterical witch hunts and the fury of a frenzied mob, our thoughts go to the events in Salem, Massachusetts in 1692.

However, if one really wants to see where hatred and fear of witchcraft begins, one need only look at German history. If there was a World Cup for witch-burnings, the Germans would be undisputed Weltmeister.

While those suspected of witchcraft had been persecuted across the Holy Roman Empire as early as the 12th and 13th centuries, things really didn’t kick off until the publication of the Malleus Maleficarum, or ‘Hammer of Witches’ in 1487.

This deeply misogynistic text was written by a priest called Heinrich Kramer in response to his failed attempts to persecute some ‘witches’ in the Tirol region. In the book, he laid out an argument in favour of the existence of witches, gave a legal and Biblical grounding for their persecution and instructed the reader on the best way to detect witchcraft.

It goes without saying that this was a deeply flawed work. Even the Inquisition felt the need to publish a statement shortly after the publication of the book, condemning it and stating that it didn’t reflect Church teaching.

Unfortunately, a new publishing industry hungry for content took the work and spread it across the German lands, finding its way into the homes of every mayor and sheriff across the country.

The Malleus Maleficarum effectively gave communities a rubber stamp for acts of mass hysteria. All it took was one person with a grudge to set a spark amongst kindling, accusing someone (usually an older woman) of cursing or hexing them.

Near where I live is the town of Leonberg, just outside of Stuttgart. While it didn’t feature a witch trial on the scale of places like Augsburg or Nurtingen in Bavaria, what happened there did leave a great deal of records, due to the fact that the trial involved the mother of one of the greatest minds of all time, the astronomer and mathematician Johannes Kepler.

In 1615, local healer and grumpy old woman, Katharina Kepler was accused of cursing a neighbour’s daughter. Trouble had brewing for a while between her and a rival, who just so happened to be the grandmother of the neighbour’s daughter and it was only a matter of time before allegations of sorcery started flying.

Mama Kepler was soon thrown into prison. You can still visit the place today – a thick, squat tower called the Steinhaus. There she was held in filth and squalor for months until Johannes (who was serving as the Holy Roman Emperor’s mathematician over in Linz) heard and came and raised hell.

This kept the angry townsfolk off her back, but only for a while. In 1620 the city fathers grew brave enough to try again.

This time Johannes came back and pulled every string he knew of to slow the process.

Finally a compromise was reached – Katharina would be given the chance to confess by being shown the instruments of torture. Then she would be released. Now, in these times, the only way someone could be punished was through a confession. In the absence of a fair, sane and reasonable legal system, most of early modern Europe figured the best way to do this was via prolonged bouts of torture with the rack, thumbscrews, fire and tongs.

Katharina was lucky – she only had to look at these implements of pain before refusing to confess and being released. Other women weren’t so lucky. Thousands of women across Germany between the 15th and 17th centuries were maimed and broken before finally being consigned to the flames.

The experience must have been traumatic for Katharina, however. Coupled with the extended periods of incarceration, Katharina ended up dying the next year, a broken woman.

Compared to most, however, Katharina Kepler’s fate is fairly benign. When placed against the trials held in Würzburg and Bamberg, eight witches immolated in Leonberg’s pokey little town square is nothing. Over a thousand people including children would be executed in the years between 1626 and 1631 as hysteria swept the region.

The persecution of women as witches would only be quashed by the arrival of the Enlightenment, and even then, small pockets of hysteria would persist well into the 18th century. As late as the 1730s, children were being accused of witchcraft in Augsburg.

Compared to other historical genocides, such as the Holocaust, the medieval persecution of Jews and the Spanish Inquisition, the witch trials of Europe seem relatively small scale.

But it is important to highlight and remember the fate of these women; victims of an insidious, almost unstoppable societal force in mass hysteria. It’s a force that, much to our chagrin, we’ve still yet to conquer.