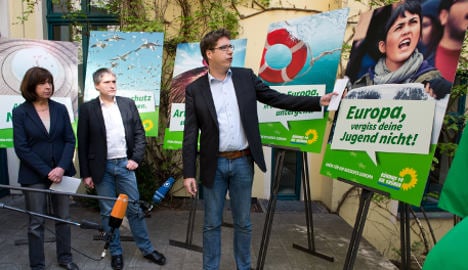 The Greens present their election posters for the EU Parliament campaign. Photo: DPA

The environmentalist Green Party is looking to make headway in the elections on a platform of "renewing" the union with a raft of political changes – but they lead with their flagship ecological policies.

The Greens, like all parties standing in this election, pledge to give EU citizens more say over decisions made at EU level. They say they will do this through more referendums.

They also want to give EU citizens the vote in national and regional elections anywhere in the EU after living there for five years.

The manifesto calls for a European convention to review, consider and modernize the contents of all the EU treaties, the results of which would be voted on directly by citizens.

The Greens also call for the western Balkan countries to apply for EU membership, but say Turkey is not ready to join due to police brutality and a lack of freedom of expression and the press.

The party has presented a "Green New Deal" to take Europe out of the economic crisis. It includes:

-Fix the crisis and lay foundations of a sustainable EU economy by investing in green energy, climate protection and new infrastructure

-Clamp down on tax evasion

They also want a European banking union as a necessary expansion of the common currency, which identifies and liquidates "sick" banks, as well as a strict separation between high street banks and investment banks.

In the banking sector they also want more consumer protection.

Climate and the Environment

The Green Party wants to continue pushing the switch to green energy – known in Germany as the Energiewende.

Their flagship policies include:

-Introduce binding targets for an increase in energy efficiency

-Build a Europe-wide transport network by plugging the gaps in European rail network especially around cities.

The Greens call for a "new beginning" for the EU’s border policy in their manifesto to make Europe more refugee-friendly.

They also say refugees should be allowed to live in whichever country they feel connected to.

The Green's pursue a foreign policy which campaigns for disarmament. They want to limit arms dealing and work towards a Europe free of nuclear weapons.

Their manifesto also calls for:

-A conference for a Middle East free of WMDs, promote a renewed dialogue between EU and Iran to find a solution to Iran's nuclear programme

SEE ALSO: What does the SPD want for Europe?

SEE ALSO: What does the Left Party want for Europe?