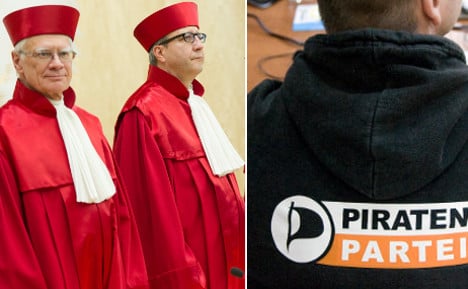 The Constitutional Court in Karlsruhe ruled in favour of small parties including the Pirates. Photo: DPA

Political parties in Germany were expected to need a minimum three-percent of the vote to make it into the European Parliament in elections on May 25th.

But 19 fringe groups including the Pirate Party, the far-right NPD and the eurosceptic AfD took their case to the Constitutional Court in Karlsruhe, arguing the three-percent threshold was not compatible with German law.

The judges agreed, stating it was contrary to electoral equality.

It means that for the first time in Germany there will no minimum hurdle parties need to clear to make it into parliament.

The German Parliament had already lowered the hurdle to three percent from five percent, but it argued if the clause was scrapped altogether the EU Parliament would become too fragmented.

In national elections the voting threshold remains at five percent.