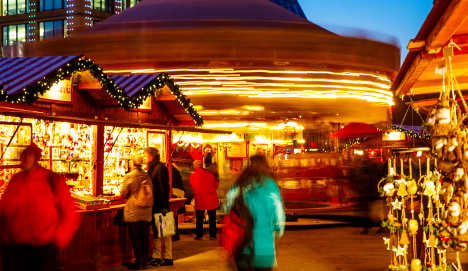 Germany's Christmas markets opened on Monday. This is in Berlin. Photo: DPA

Germany’s Weihnachtsmärkte, are world famous for their seasonal cheer. Musical programmes, parades and the unique traditions in each city make the Christmas markets more than just a place to buy gifts and enjoy Yuletide treats — they are long-standing cultural events, some dating back hundreds of years.

Germany’s larger cities typically host a number of markets where locals and tourists stroll past craft stalls full of hand-made treats to stuff the stockings. One of the oldest and most famous of these is the Christkindlesmarkt in Nuremberg, which gets some two million visitors every year.

Christkindlesmarkt, well-known for its 180 stalls and specialty sweets, dates to 1628. The appearance of the Nuremberg Christmas Angel, known in German as Christkind or “Christ-child,” gives this and many other German Christmas markets the name Christkind(e)l(s)markt.

The Christmas Angel, a girl aged between 16 and 19-years-old, is chosen every two years by Nuremberg residents and opens the Christmas market by reciting a short speech. She also visits charities, children’s hospitals and other Christmas markets. Representing the Christ child, the Christkind was first suggested by Martin Luther to replace the Catholic gift-giving figure of Saint Nikolaus.

Bavaria’s capital Munich also has a historical Christkindlmarkt, lit by 2,500 candles that bedeck the 30-metre Christmas tree in the city centre’s famous Marienplatz. Merrymakers can try Munich’s culinary specialties such as Bratäpfel, or fried apples, and honey cake called Honigkuchen while they watch spectacles such as the Krampuslauf, when St. Nick’s trolls march through the market.

Just around the corner from Munich’s Christkindlmarkt is the Kripperlmarkt, or manger market, which features nativity scenes.

The Römerberg Weihnachtsmarkt in Frankfurt was first referred to in documents some 600 years ago. These days it receives some three million visitors per year. The carillon bells at Frankfurt’s Nikolaikirche can be heard three times daily during the Römerberg Christmas market, and visitors can enjoy visits from St. Nicholas and a number of choir performances.

Click here for The Local's visual guide to Christmas markets

Berlin also offers a number of markets to choose from, with at least one in each of the city’s twelve districts. For an upscale market, the WeihnachtsZauber – which charges a small admission fee – occupies the refined Gendarmenmarktsquare. Covered tents provide gourmet food specialties and pricey handmade goods – offering much more than standard kitsch.

The charming Scandinavian-influenced Lucia Weihnachtsmarkt, nestled into the courtyard of a former brewery in the gentrified former East Berlin district of Prenzlauer Berg, also has a cozy atmosphere. There is even a sauna for those who want to beat the chill alpine style.

Berlin's largest market in the Spandau district old city centre has about 200 stalls on weekdays and 400 on weekends. But the biggest attraction is a big nativity scene with live animals in front of the Nikolai church.

Hamburg also has several markets to offer. The old-fashioned Rathausmarkt, named for its location in front of town hall, is one of the most popular. Styled by a former circus director, it holds rarities like an old carnival organ, vending trolleys from the turn of the century, an art nouveau coffee house, and a 1920's merry-go-round.

Another well-known Christmas market is the Hanseatischer Weihnachtsmarkt in Hamburg’s Gänsemarkt. This market will enchant visitors with gospel choirs, literary goodies, trumpet orchestras and church services.

In Cologne, the most popular market is located in front of the city’s stunning Gothic cathedral, the Weihnachtsmarkt am Kölner Dom, which boasts the largest Christmas tree in the Rhineland and a number of open-air concerts. There is also a medieval Christmas market at Cologne’s Chocolate Museum. Visitors in search of extra novelty can find it on the MS Wappen von Köln, the city’s floating Christmas market on the Rhine River.

Dresden is home to the world-renowned Striezelmarkt located near the recently restored Frauenkirche. The market is named for its traditional Christmas cake, Hefestriezel, which has come to be known as Stollen, a popular holiday treat across the country. The Stollen festival, which takes place this year on December 6th is one of the market’s highlights. Dresden also boasts the world’s tallest Christmas pyramid, celebrated this year on December 13th. Christmas pyramids – spinning towers decorated with lights and figures – originated in theErzgebirge mountain region near Dresden.

While bigger cities have the most well-known Christmas markets, almost every German town boasts a smaller, and perhaps even more charming market, each with its own traditions and regional specialties.