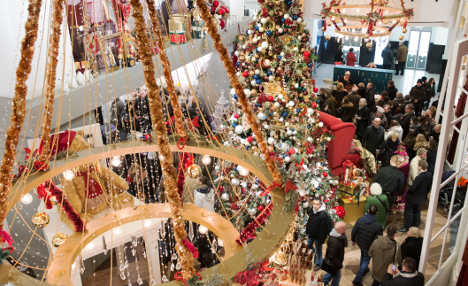 Christmas shoppers at Berlin's KaDeWe in 2012; Germans will spend even more this year Photo: DPA

The planned increase of 19 percent in spending should please shopkeepers across the country said consultants Ernst & Young, who conducted the survey of shopping intentions.

"Retailers in Germany can look forward to a good Christmas" said E&Y retail expert Thomas Harms. "They can get a tidy profit from the Christmas business this year."

Internet retailers will be among the biggest winners according to the study, with shoppers under 35 spending nearly a third of their Christmas shopping budget online.

But department stores and shopping centres will not be left out in the cold. "They offer an individual shopping experience," Harms said, "and they could well stay competitive for a long time yet."

More than a third of Germans get their gift ideas during a traditional high-street shopping trip, the survey suggested, while only a quarter look on the internet for inspiration.

Berlin's top department store KaDeWe – the closest thing the German capital has to Harrods – has already begun its transition into a Christmas wonderland – and the store could have a very merry Christmas indeed, according to the study.

The Society for Consumer Research (GfK) has similarly rosy expectations of Germans' holiday spending, with recent reports showing the "buying mood" in Germany remained unbroken, with people more open than in recent years to higher spending.

People are also less desperate to save their money due to low interest rates earned on savings, the GfK reported.

Comforted by the country's economic stability, the numbers of Germans making big purchases on credit, also at low interest rates, are creeping up.

In a GfK survey, 33 percent of households said they were using credit to finance a larger outlay like a new car, kitchen or TV – four percent more than last year.

Marco Bargel, chief investment strategist at the German Postbank, said he saw nothing to stand in the way of a big end-of-year spike in retailers' turnover.

"The readiness to buy among Germans is the highest it has been in a long time," he said.