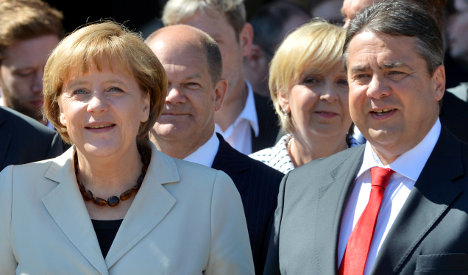 Despite a convincing win at the polls, Merkel needs to form an alliance with either the Social Democratic Party (SPD) or the Greens to ensure a majority in parliament.

in last Sunday’s election, Peer Steinbrück, said he would no longer hold a leadership role in the SDP, according to a party source.

discuss the party’s next move after it came second in the polls with just under 26 percent.

The prospect of a left-right “grand coalition” between the CDU and SPD has the backing of the German public, a poll for ZDF public television showed Friday, with 58 percent saying they would find it “good”. However, 32 percent approved of the CDU teaming up with another potential ally, the Greens.

Despite agreeing to talks, many in the SPD are still haunted by memories of the party’s last tie-up with Merkel during her first term from 2005-2009

Then, supporters left the party in their droves, punishing it with its worst ever ballot box result, leaving many SPD members wary of signing up to any new coalition.

Prior to the meeting, SPD deputy Johannes Kahrs said the party should not accept anything less than an equal partnership.

“The CDU must simply realise that anything less than 50-50 … won’t work and also won’t be accepted by the (party) members,” he told news channel NTV.

Hubertus Heil, deputy head of the SPD’s parliamentary group, may have set the tone for the weeks to come, by saying: “If Mrs Merkel thinks she can just carry on as she has done then there won’t be a grand coalition,” he told broadcaster NDR.

Top selling daily Bild warned that the talks between the traditional rivals would be protracted.

“We could be in for the most difficult coalition negotiations in the history of the republic,” it wrote, recalling that the SPD and the CDU needed two months to seal a deal in 2005.

The US-based Council on Foreign Relations said, if and when a grand coalition is formed, it could be “unwieldy”, with the SPD set to “bargain hard over domestic issues”.

“Paradoxically, even though Merkel won a convincing victory, she may end up a weakened chancellor,” it said.

During their previous four years together, the SPD watched helplessly as Merkel claimed credit for shepherding Europe’s top economy safely through the financial crisis while its own political profile was diluted.

Although 64 percent of SPD voters backed a grand coalition in the ZDF poll, a different Forsa survey showed nearly two thirds of SPD members did not.

A further lesson is the fate of the Free Democrats, Merkel’s junior partner during her second term, who crashed out of parliament in Sunday’s election for the first time since 1949 after haemorrhaging support to the conservatives.

The daily Tagesspiegel on Friday featured a cartoon with Merkel as a ravenous cat beckoning the SPD to emerge from its mouse hole.

“Come on out! Think about your civic responsibility to the state,” she purrs.

Meanwhile, Peer Steinbrueck, who led the Social Democrats’ election campaign against Chancellor Angela Merkel, announced at the meeting he would stand down from all his positions of responsibility in the party, a source told the German DPA news agency.

“My political life will come to an orderly end,” he told fellow members of the Social Democratic Party (SPD) in Berlin, according to the source.

Steinbrück, the former premier of populous North Rhine-Westphalia state, was chosen as the candidate to challenge the popular Merkel after other top players excused themselves from what many saw as a political suicide mission.

The trained economist had earned respect as a finance minister under Merkel in a 2005-2009 coalition.

But a string of blunders and gaffes plagued his campaign, including a magazine over which saw him pointing a middle finger at the camera.