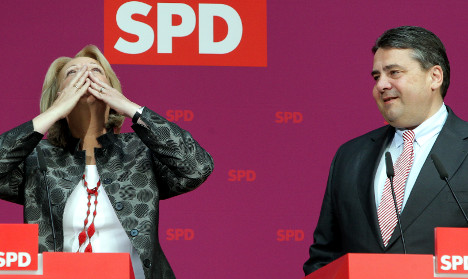 SPD chairman Sigmar Gabriel will ask the 200 delegates meeting in Berlin to agree on the procedure which would see coalition negotiations with Merkel’s Christian Democratic Union (CDU) followed by a vote on the terms by the party’s entire membership.

The Süddeutsche Zeitung, which reported Gabriel’s tactic, said this was the only way the leadership could be sure of grassroots support if they were to take the party into coalition with the CDU.

The newspaper also said that such a vote among the nearly half-a-million members would ideally take place before the annual SPD party conference on November 14th.

The paper said this showed Gabriel and other SPD leaders tying their political fortunes to the question of ruling in coalition with Merkel. He and the others set to negotiate a coalition contract could hardly expect the party conference to elect them to high office if the grassroots had rejected their coalition plans.

The fear is that the Social Democrats would lose their profile in any coalition with Merkel – particularly as following Sunday’s election the CDU is by far the most powerful party in parliament.

Her coalition partner until now, the Free Democrats (FDP) performed so badly during the past four years in her government that their voters deserted them at the polls and they failed to even clear the five percent hurdle necessary to get into parliament.

This has left the CDU keen to form a coalition with the SPD – a so-called grand coalition, like the one which brought Merkel to power the first time around in 2005. The CDU is hoping for preliminary talks to take place in the coming week.

More than half of Germans would like to see such a coalition – a figure that has been pretty steady since well before September 22nd’s election.

A poll conducted for broadcaster ZDF showed 58 percent wanted to see the CDU and the SPD pair up to rule the country. Approval among Social Democrat members is even stronger, with 64 percent wanting to work with the conservatives.

A further 32 percent said they wanted to see Merkel and the Greens work together.

Just 22 percent want the Linke, the SPD and the Greens to put a government together.

But the initial lack of enthusiasm from the Social Democrats has been taken by the far-left Linke as a positive sign that the idea of forming a coalition without the CDU – could work. This would require the Greens and the Social Democrats to ignore their previous rejection of working with the Linke.

Linke leader Bernd Riexinger told the Rhein-Zeitung newspaper on Friday, “The longer the stalemate lasts, the greater the pressure becomes that for at least red-red-green preliminary talks.”

The Linke came out of the election as the third strongest party in Germany with 8.6 percent of the vote. This was behind the CDU which won 41.5 percent, and the Social Democrats who were on 26 percent. But the Linke were marginally ahead of the Greens who managed just 8.4 percent.