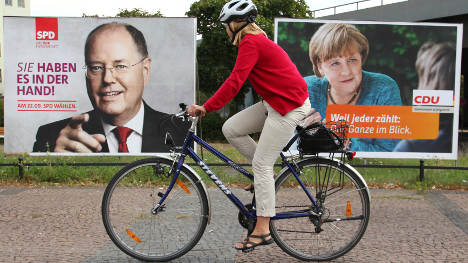 How much will the government take in tax?

According to a survey by Emnid, social or fiscal policy is the number one consideration for 80 percent of Germans when deciding which party to vote for – and, although they are not allowed to vote, ex-pats are no exception.

The CDU wants the tax system to benefit married couples and families, while the FDP advocates tax breaks for businesses.

The left-of-centre parties – the Social Democratic Party (SPD), the Greens and left-wing Die Linke- want more support for single people and those on low incomes.

The main area of disagreement between the parties centres on income-splitting (Ehegattensplitting).

Income splitting, under the current taxation system, allows married couples to combine their salaries and split the total down the middle so that each person pays tax on the couple's average income.

The CDU has pledged to continue with the current system but amend it so that couples with children benefit more.

But the SPD has criticized income splitting for being expensive and unfair to unmarried couples and those on lower incomes.

According to Steinbrück, the current system is “a benefit for the highest earners, while those on low salaries are clearly at a disadvantage.”

The Greens want to restrict income-splitting for couples on high incomes, whilst Die Linke wants to do away with the current system entirely.

Driving on the Autobahn

Depending on the outcome of the election driving on the autobahn could get pricey. Horst Seehofer, leader of Merkel’s Bavarian allies, the CSU, wants to charge foreign cars to drive on Bavaria’s motorways.

A toll on non-German passenger cars using the autobahn is a pre-requisite for the CSU's involvement in any future government, he said.

Seehofer argues that the tax is justified since Germans are obliged to pay road tolls “in almost every neighbouring country”.

But the proposition has met with opposition from other politicians and is potentially incompatible with European Union regulations, which prevent discrimination.

The future of the EU

The election could have a major impact on the future make-up and orientation of the EU.

If re-elected, Merkel hopes to slim down the EU bureaucracy. Together with UK Prime Minister David Cameron, Merkel would like to reduce the number of European commissioners and give member states more control over who can access benefits in their respective countries.

These plans would be proposed in Brussels in September and could be implemented as early as next year.

A smaller bureaucracy would reduce Brussels control and some powers would therefore be returned to the individual member states.

According to The Sunday Times, foreign officials in the UK and Germany think some commissioners’ jobs are “jokes” – positions created merely to ensure that each member state is represented.

Merkel and Cameron are also united in their desire to give member states more control over who can access benefits in their respective countries. The chancellor regards this as a pressing concern given the large influx of Romanian and Bulgarian migrants expected when travel restrictions are lifted next year.

The elections could also affect German attitudes towards Europe. The country’s first euroscpetic party, Alternative für Deutschland (AfD) wants to see an end to the eurozone and Germany´s withdrawal from the common currency.

It is possible that the anti-European AfD will enter the Bundestag. This could trigger an increase in anti-EU sentiment in parliament which would be awkward with a bailout for Greece expected next year.

A special relationship with the US?

Since the end of the Second World War, Germany has enjoyed a close relationship with the US in terms of both trade and foreign policy. Recently the relationship was strained by what many feel to be excessive surveillance in Germany by America´s National Security Agency (NSA).

The SPD has been particularly vocal in its criticism of the NSA in the spying scandal. Their leader Peer Steinbrück called the affair “the greatest crime against fundamental rights” in Germany's history.

An SPD victory could therefore trigger a cooling in diplomatic relations between the two countries.

Merkel’s government, meanwhile, has continued to help the US locate targets for drone attacks in Afghanistan. Washington presumably favours a Merkel victory seeing her as a more cooperative foreign policy ally.

How will the election affect healthcare?

At present health insurance in Germany is funded primarily through payroll contributions – 90 percent of Germans are insured through the state and 10 percent have private indemnity insurance, but it is administered by a combination of private, non-profit, and state-owned healthcare providers.

The CDU/CSU's main goal is to maintain the status-quo and maintain the current level of healthcare payroll contributions (15.5 percent). It wants to keep the parallel private health insurance system.

Meanwhile, the Greens want to introduce a universal health tax, which would not only target payroll taxes (as currently) but also tax capital gains, rent income, and pensions.

Health economist and Young Voices Advocate Frederik Roeder told The Local: "The SPD's and Greens' plans would make labour more expensive in Germany since they want to burden employers with more of healthcare costs.”

The CDU wants to see the introduction of all-day care in some German schools. In its campaign for the construction of an all-day school in Hessen the Christian Democrats also expressed their belief that parents should be free to choose which school their children attend. “I wouldn’t like the state to decide which school I send my children to,” said state representative Hans-Jurgen Irmer last Tuesday in Wiesbaden.

Education is particularly important to the Greens. As well as campaigning for all-day schools – like their CDU rivals – they pledge to increase the education budget to at least €500 million a year and promise that universities will be better-equipped thanks to increased investment.

The party has called for 3.5 percent of Germany's GDP to be invested in university research and development by 2020.

If it enters a government coalition, the SPD plans to make it easier for foreigners to gain dual citizenship in Germany.

The SDP argues that increasing the number of Germans with joint citizenship would improve integration.

The current CDU-FDP coalition, meanwhile, is divided over the issue. The FDP wants the number of residents with dual citizenship to increase, whereas CDU Chancellor Angela Merkel sees no need for change.

Current CDU policy encourages foreigners to opt for one nationality or another rather than issuing dual citizenship passports. Effectively, if foreigners want to apply for German citizenship, they must give up their previous nationality.

SPD representative Aydan Özoguz said in June: "The obligation to choose [one single nationality] must be removed immediately. It is out of touch with reality, restricts integration and is a bureaucratic monstrosity."

The SPD has criticized current legislation – based on the Citizenship Law of 1913 – whereby citizenship is determined by one's family's descent and not their place of birth. This means that people of foreign descent born in Germany do not necessarily qualify for German citizenship.

Despite restrictions imposed by the current coalition, dual citizenship is already granted in many cases. According to Die Zeit, of the 106,897 people granted German citizenship in 2011, over 50 percent were allowed to keep their old passport.

However, these citizens were predominantly from EU states, Switzerland, Morocco and Iran – countries which refuse to allow their citizens to switch nationality, hence dual citizenship had to be given.