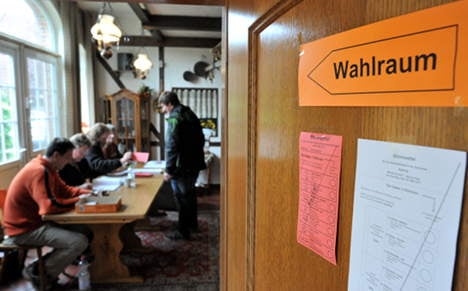 Over the past 30 years the share of Germans who get out and vote on election day has dropped by 18.3 percent. This was outstripped only by Portugal where the figure dropped by 19.7 percent over the same period. In the US, just 2.5 percent of voters had been lost, Die Welt newspaper reported on Tuesday.

The next general election is due on September 22nd, when voters will be asked to decide whether to re-elect Chancellor Angela Merkel’s Christian Democratic Union and its coalition partner the Free Democratic Party. She is being challenged by the Social Democrats led by Peer Steinbrück. Current polls would suggest Merkel’s CDU will get the largest share of votes, but a continuation of the coalition is under question.

At the last general election in 2009, a third of Germans who could vote decided not to, according to the study carried out by pollsters Forsa for the Friedrich Ebert Foundation political foundation. For regional elections, this varied between half and a third not voting.

The study aimed to learn about non-voters are, the paper said. Analysts were able to break them down into four groups. The largest was the “sporadic non-voters,” comprising of 46 percent.

Behind came the 24 percent who had not voted in the previous two or three general elections but had voted before that. Sixteen percent said they planned on not voting for the first time at the upcoming September general election. The smallest group was the 14 percent who were long-term non-voters.

Non-voters did not disagree with the idea of democracy though, with 85 percent saying they supported the concept. Seventy one percent said they were happy with the German democratic system and 79 percent were happy with German politics on the whole.

What there was, the study’s authors said, was a lack of decent dialogue between politicians and voters. Yet while improving this would help, it could not completely solve the problem of dwindling interest.

The Friedrich Ebert Foundation is affiliated with the centre-left Social Democratic Party, and its authors warned of “a threat to democracy, if the a large part of the population stay away from the polls.”

This theory was questioned by another NGO, the conservative-affiliated Konrad Adenauer Foundation which suggested an increase in non-voters showed an increase in people who were more generally happy with the country’s politics.