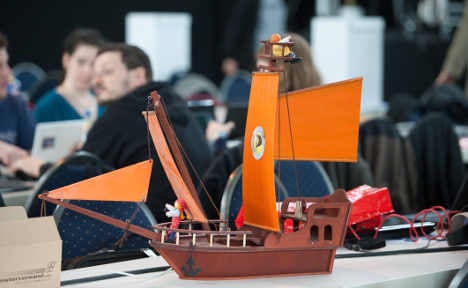 With fighting talk and a new face among those at the helm, more than 1,000 members gathered in the southern Bavarian town of Neumarkt for the party’s three-day congress to hammer out its manifesto.

Seen until relatively recently as an upstart party after grabbing seats in four regional elections since 2011, support for the Pirates, who advocate more transparency in politics and Internet freedom, has dwindled.

“We Pirates have come to stay and leave our mark,” Bavarian candidate Bruno Kramm said, rallying the party to set down the “basis for a new start” leading to its entry into the Bundestag lower house of parliament.

Founded in 2006 in Germany on the model of a Swedish party, the Pirates first came into their own two years ago by capturing seats in the Berlin state legislature.

They went on to win seats in three further regional parliaments.

But surveys now show the party only garnering around two percent of the vote — a far cry from the 13 percent it was attracting around a year ago — and quarrelling among its leadership has overshadowed its policies.

German political parties need to win five percent of the vote for the right to parliamentary seats.

A leading party official Johannes Ponader officially announced at the congress that he was stepping down. He had clashed with the party’s leader over the right course for the September 22 general elections and prompted criticism among the membership for unilateral decisions on issues.