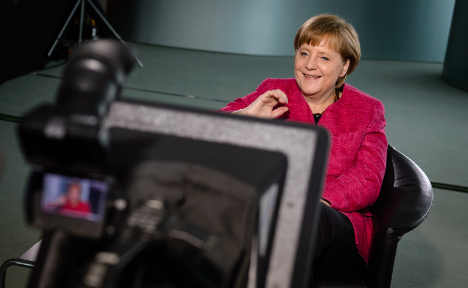 Initial technical glitches, which threatened to pull the plug on proceedings, were overcome to facilitate a conversation which some commentators are describing as civilized and uninspiring in equal measure.

Presenter Marc Weiß opened the discussion and invited each of the guests, who were lined up in neat boxes at the bottom of the screen, to introduce themselves.

They included a medical student who runs a forum for Muslim scholarship holders, a community worker offering intercultural sports sessions, a high school teacher and a police officer tasked with recruiting employees with foreign backgrounds.

The discussion, which included pre-arranged questions from the guests and others submitted by email, ran smoothly but did not provide much insight into future policy direction.

In response to a question on how to tackle the negative images associated with people with foreign roots, Merkel said the key was that they be represented in all walks of life. She expressed the desire to see as many people with so-called migrant backgrounds going to university as Germans, but was quick to qualify – “that is (Germans) that have been in Germany for a long time.”

She went on to cite the example of a German actor with migrant roots who complained of always being offered the roles of drug baron or other criminal but who longed to be cast in another role, such as mayor.

“Every person must be viewed as an individual,” the chancellor said. “I can’t just look at North Germans and say ‘They can’t talk and stay silent the whole time,’ or ‘Bavarians laugh all the time and drink beer.’ We must take each person as they are.”

In the run-up to the federal election in September however, the chancellor will be hoping that her personal glowing satisfaction rating will be reflected in the CDU’s performance as a whole.