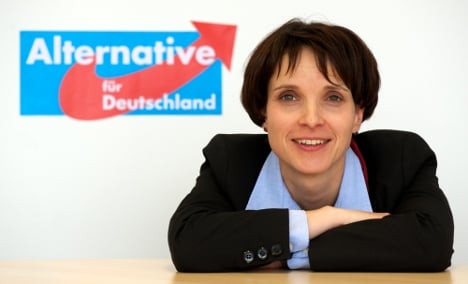 AfD held a founding party congress in Berlin on Sunday to pick its candidates for the vote in September, and to hammer out its platform for the upcoming campaign.

A mere two percent in the votes for the euro-sceptic party could cost Chancellor Angela Merkel’s conservatives (CDU/CSU) their majority and push their junior coalition partner the pro-business Free Democrats (FDP) under the five percent threshold to get seats in parliament, according to Prof. Oskar Niedermayer from Berlin’s Free University.

“I’m very sceptical as to the prospects of this party entering the Bundestag, but that doesn’t mean it’s not politically relevant,” he said.

But Niedermayer is reluctant to class the party, which backs a German exit from the eurozone, as right-wing populist.

“The party can certainly be classified as a protest party, having been created out of protest at government policy during the euro crisis. [But] one should not place it in the [populist] category yet, even if some of the wording of its [party] platform gives that suspicion,” he said.

Alternative for Germany enjoys some support from the far-right, the political scientist added, although the same could be said of the now left-leaning Pirate Party, which campaigns for internet freedom and civil rights, when it first started out.

According to Niedermayer, the new party is rather trying to establish itself as a middle-class conservative party.

“It’s promoting itself as a conservative party to the right of [Merkel’s Christian Democrats]. Dissatisfied followers of the CDU/CSU as well as economic-liberals who support the FDP could be won over,” he said.

But he doesn’t believe the euro crisis will be the big topic of the election campaign.

“The crisis has up till now not affected the daily lives of Germans,” he said.

Even if that were to change it could play into the hands of Chancellor Merkel, who has thus far been seen as a competent crisis manager, he added.

The coalition would nevertheless do well not to ignore this new party, according to Niedermayer.

“It no longer suffices to label current government policy as the only alternative,” he said.