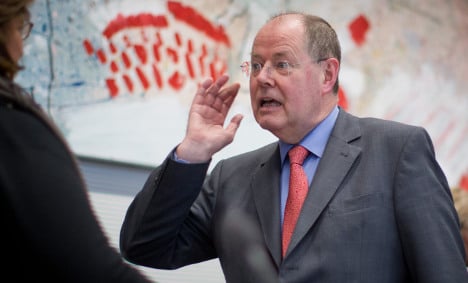 But her current coalition partner, the business-friendly Free Democrats are still failing to clear the five percent hurdle necessary to send any MPs to parliament – they are still languishing at three percent this week, up one percent since last week.

If the FDP go on like this it would force Merkel into taking a different coalition partner to form a government, with the weakened SPD still the most likely candidate.

Also struggling to clear that hurdle are the Pirate Party, currently on four percent. The socialist Left party scored eight percent, and seems set to retain its parliamentary representation.

The SPD’s preferred coalition partner the Greens dropped a point on last week, to reach 14 percent, meaning that the CDU party alone stands six percentage points ahead of a potential SPD-Green coalition. The figures were published by Stern magazine and broadcaster RTL, commissioned from polling firm Forsa.

Forsa said the SPD’s 23 percent was their lowest level of support since July 2011, and if this was reproduced in the election, would translate to its worst ever result – the same as in 2009.

This was the election which buried Merkel’s coalition with the SPD and propelled her and the FDP to power. That was also the last time SPD chancellor candidate Peer Steinbrück held federal office – as Merkel’s finance minister.

Steinbrück’s performance in the polls continues to decline, with just 18 percent of Germans selecting him when asked who they would vote for if they could decide their chancellor directly – a drop of four percent since last week.

Merkel secured 59 percent when people were asked the same question – one point up on last week.

Forsa head Manfred Güllner said the continued losses suffered by the SPD were due to the frustration and irritation experienced by many potential SPD voters thanks to the debate about Steinbrück himself as a candidate.

Güllner told Stern: “They are ducking out and do not want to acknowledge their party loyalty.”

In contrast CDU supporters are solid. “They are happily standing by their party and the chancellor,” said Güllner.