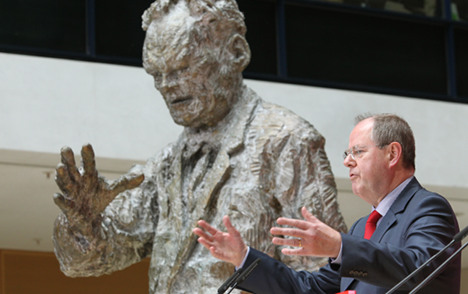 Steinbrück, 65, vowed an “exciting” and “fun” campaign in the run-up to the election that must take place in September or October 2013 as he attacked Merkel’s record and promised greater regulation of the banking sector.

“I think that the … vast majority of the cabinet – I admit there are maybe two exceptions – is one of the worst, maybe the worst cabinet in the history of the federal republic,” he told supporters and reporters.

The leadership of the Social Democratic Party (SPD) earlier Monday unanimously elected Steinbrück as their candidate to challenge Merkel ahead of his formal nomination at a party convention in December.

He said the election would be about “what type of society we want to live in” and called for tougher regulation on banks, including the establishment of a fund to protect taxpayers from having to bail lenders out.

Polls show Steinbrück has an uphill struggle to unseat Merkel, nominated by Forbes Magazine as the world’s most powerful woman, at the helm of Europe’s top economy and political powerhouse.

Surveys have consistently placed her conservative CDU/CSU bloc around 10 points ahead of the Social Democrats as voters in Germany approve of Merkel’s handling of the long-running eurozone debt crisis.

Steinbrück vowed to mobilise traditional SPD voters as well as those disillusioned by Merkel and her conservatives.

He accused her of dealing with the “symptoms, not the causes” of the eurozone crisis.

After serving as finance minister in Merkel’s first cabinet from 2005 to 2009, he has ruled out accepting a job in a potential “grand coalition”, making his bid for the chancellery an “all or nothing” affair.

However, although generally a respected finance minister, Germans appear to be sceptical of handing Steinbrück the keys to the chancellery.

An Emnid poll for the Bild am Sonntag weekly showed 63 percent of voters do not believe he will be Germany’s leader.

The most likely outcome if polls continue at their present level is another “grand coalition” of CDU/CSU and SPD.