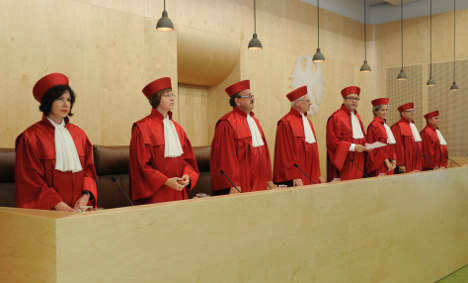 “Despite a generous, three-year deadline for the election lawmakers to set out a new regulation, the result – and that is the agreed opinion of the court – is sobering,” said Constitutional Court President Andreas Voßkuhle.

“Considering the history of the new election law, the court sees no possibility of again accepting the anti-constitutional position for an interim period,” he continued, Der Spiegel magazine reported on Wednesday.

The rules – passed by Chancellor Angela Merkel’s government despite disagreement from the opposition parties – concern the sharing out of parliamentary seats between parties.

Currently the system of awarding “overhang seats” favours larger parties in the mixed election system. People have two votes – one for their regional constituency candidate, and one for a party.

The parties are awarded parliamentary seats according to how many party votes they get. If a party is entitled to more seats than the number it won directly, the remaining number are filled from the party candidate list.

But if a party wins more directly elected constituency seats than it is entitled to from its party votes, it gets them all, and the additional ones are called “overhang seats” and are considered unfair.

Currently there are around 15 such seats, which is far too many, Voßkuhle said. They should not be completely banned, but they should not become so many that they “alter the basic character of the federal election as a representative election,” he said.

Such distribution of seats, “contravenes in several ways, the basic law of equality before election law, and the right of political parties to equal chances,” he said.

The court demanded changes to the election laws back in 2008, and gave lawmakers until July 2011 to present a proposal. The government did put a new law together, and passed it last December, but it was immediately challenged by opposition parties and more than 3,000 citizens – putting it back into the hands of the crimson-clad Constitutional Court judges.

Parliament will now have to work out a new reform and pass it quickly. The constitutionally defined latest date for the next federal election is 27 October 2013.