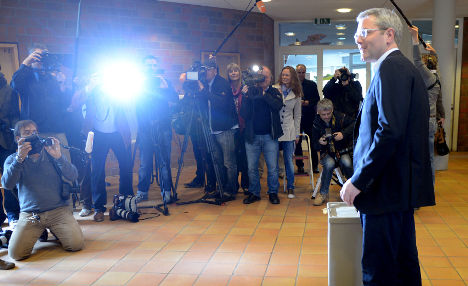 Around 16 months before national elections, the snap poll in the state of North Rhine-Westphalia, Germany’s most populous with 18 million people, is closely watched as a taste of things to come at federal level.

While Germans nationally back Merkel and her tough stance on European belt tightening and debt reduction, voters in NRW handed her conservatives their worst ever result in the western state.

Her Christian Democatic Union (CDU) won just over 26 percent, according to preliminary results, while the main opposition Social Democrats (SPD) took 39 percent in NRW, home to the Ruhr industrial heartland.

The result is a further blow to Merkel, a week after her strategy for fighting the eurozone crisis took a hit in Greek and French votes, prompting her to warn against “growth on credit.”

It also comes two days before she hosts French president-elect Francois Hollande who campaigned on a pledge to renegotiate the eurozone’s fiscal pact for tighter budgetary rigour which Merkel argues is essential to underpin the continent’s eventual recovery.

The SPD has echoed calls by Hollande to place more emphasis on growth in the fiscal pact and Merkel, who needs a two-thirds majority in parliament to ratify the fiscal pact, will therefore need opposition support.

“We put people at the centre,” the SPD’s incumbent state premier Hannelore Kraft said, who looked set to form another coalition with the ecologist Green Party but, this time, with a majority.

The Greens scored 11.5 percent, according to the preliminary results, while the upstart Pirate party continued its winning streak with more than seven percent.

This enables the party which campaigns on a pro-transparency platform to enter the state parliament, its fourth entry into a regional parliament since September.

Notching up a success in the vote was Merkel’s pro-business coalition partners at the federal level, the Free Democratic Party (FDP), which confirmed a reversal of its fortunes, after a string of humiliating defeats.

Hot on the heels of its better-than-expected result last Sunday in Schleswig-Holstein state, the FDP took about 8.4 percent, significantly better than the around three percent it is polling nationally.

“The defeat is bitter and it really hurts,” said the CDU’s main contender Norbert Röttgen, who is also Merkel’s environment minister.

He had faced off against Kraft in the poll, which was triggered after the minority state government unexpectedly fell when the regional parliament failed to pass a draft budget after just 22 months in power.

Kraft had argued the need for public savings but also focused on jobs, education and nursery places, while Roettgen took aim at the SPD contender for clocking up public debt.

Röttgen’s campaign ran into trouble when he failed to commit to staying in opposition in the region if he lost Sunday’s vote. He later had to backtrack after reportedly irking party allies by saying the NRW vote was a referendum on Merkel’s policy on Europe.

The Stuttgarter Zeitung newspaper said Kraft had won over people with her social policy.

“That she further increased the deficit despite growing revenues, people did not hold against her, quite the opposite. Obviously, the message from Düsseldorf to Berlin, is that the citizens are tired of the drive for consolidation,” it said.

The vote was the third regional election in Germany in eight weeks and comes a week after Merkel’s centre-right coalition lost power in the state of Schleswig -Holstein.

Merkel plans to fight for a third term in elections due in late 2013. NRW historically plays a big role in federal politics – in 2005, a lost vote in the state prompted then Chancellor Gerhard Schröder to call a snap federal election which saw Merkel wrest power from him.

Bordering the Netherlands and Belgium, NRW was once known as the “land of coal and steel” helping to power the country’s post-World War II economic miracle.

Both sectors have since declined but other industries such as mechanical engineering and metal and iron-working have grown.