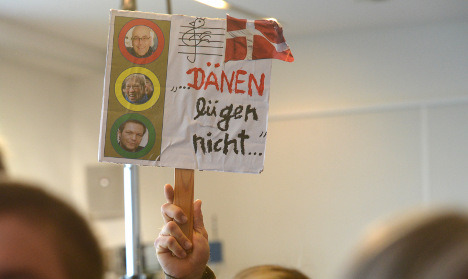 The most likely outcome is a centre-left “Danish traffic light” coalition – made up of the Social Democratic Party (SPD), the Green Party, and the Südschleswigsche Wählerverband (SSW) – which represents the state’s Danish and Frisian minorities.

Chancellor Angela Merkel’s Christian Democrats (CDU) won 30.8 percent of the vote, with the SPD very close behind, on 30.4 percent. The continuing weakness of Merkel’s national coalition partners, the business-friendly Free Democrats (FDP) – who garnered only 8.2 percent – means that the SPD is in the strongest position to govern.

The SSW won only 4.6 percent of the vote, but a special agreement made with Denmark in 1955 frees the party from the usual five-percent hurdle for gaining access to parliament.

A Danish alliance with the SPD and the Greens would only have a paper-thin majority to rule with – initial prognoses suggest it could be as little as one seat – but that is not deterring the SPD’s leading candidate Torsten Albig, who told RBB radio Monday morning, “We have a majority. Majorities are there to be applied.”

But Merkel’s CDU – reeling from their worst Schleswig-Holstein result since 1950 – is still hoping to out-manoeuvre the SPD in the forthcoming coalition negotiations. Their leading candidate Jost de Jager said that his party would “offer the other parties talks,” but he admitted that he would not be able to prevent the SPD forming a “Danish traffic light” if the SSW was willing.

But de Jager’s personal position is weakened by a quirk of Germany’s electoral system, which means that, despite having led the CDU to a nominal victory, he will not be able to enter the state parliament himself.

The Christian Democrats won 22 directly-elected seats – exactly the number they are entitled to by the proportional representation vote – which means they cannot draw on the list of PR candidates to add more representatives. De Jager, having no direct mandate, is therefore excluded from parliament despite heading the list.

The CDU’s only consolation is that they actually remained the state’s biggest party, but their miserable showing will likely scupper their chances of staying in power.

The FDP, for its part, hailed its 8.2 percent as a back-from-the-dead result, since it is polling well below five percent nationally.

The Greens, meanwhile, won a record 13.2 percent, while the socialist Left party failed to gain enough votes to enter parliament. The Pirates also entered the state parliament for the first time, matching the FDP on 8.2 percent.