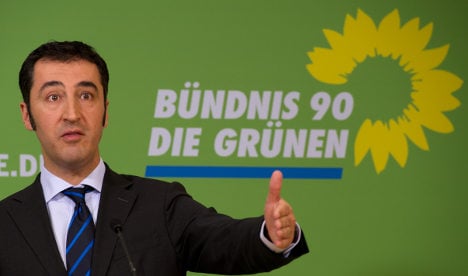 Green leader Cem Özdemir said on Saturday that a possible cooperation with the conservative Christian Democrats (CDU) should not be ruled out.

Yet this contradicted statements made by the co-leaders of the Green parliamentary party, Renate Künast and Jürgen Trittin.

Özdemir said in Der Spiegel magazine that the party had decided against ruling potential partners out at a conference back in 2009.

“I don’t have the impression that there is the desire within the party to change anything on that at the moment,” he said.

He was backed up by leader of the Green state parliamentary fraction in Lower Saxony, Stefan Wenzel. He said the calls for ruling out working with the CDU made no sense.

“The question of coalitions is as I see it, not a dogma,” he said.

The Greens returned to the subject after the Berlin election on September 18, when they did worse than had been expected. Trittin afterwards called for the Greens to work to get rid of the CDU coalitions with the Free Democrats in Schleswig-Holstein and Lower Saxony in state elections over the next two years – “without leaving a trace.”

Künast had said one should close off the option of any potential coalition with the CDU.

But Özdemir said although he favoured the Social Democrats as partners, “I cannot imagine that any of us seriously wants us to automatically become the junior partner of the SPD.”

He said the Social Democrats were competitors, and that Green politicians involved state elections should have the option to decide themselves what to do. He said there was no need to take part in ruling anything out a full two years ahead of the federal election – even though he saw the chances of forming a coalition with the CDU as very unlikely.