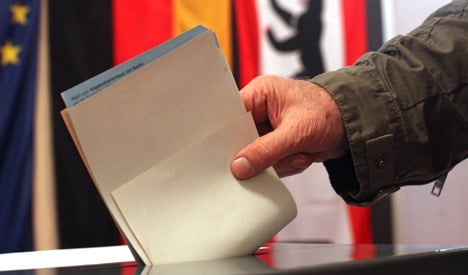 Polling stations in the German capital opened at 8:00 am for a vote widely expected to return the colourful Social Democrat mayor for the last decade, Klaus Wowereit.

While Merkel’s conservatives look set to place second or third in the left-leaning metropolis, her junior coalition partners, the Free Democrats, may crash out of the state legislature for the fifth time in a poll this year, which could further complicate a increasingly tenuous alliance on the federal level.

Merkel, named the most powerful woman in the world by Forbes magazine last month, has proved unable to rein in the pro-business FDP in the debate over a response to the eurozone crisis.

Observers say it may grow even more rebellious after a debacle in Berlin, following a further poll disaster earlier this month in Merkel’s home state in which it was even trounced by the neo-Nazi National Democratic Party.

This time it is the Pirate Party which may well oust the venerable FDP, which has served in most post-war German governments.

An irreverent outfit with roots in Scandinavia, the Pirate Party calls for free wireless Internet service for all, unlimited access to public transportation funded by taxes and better data protection.

Under intense pressure, the FDP candidate Christoph Meyer has drawn applause on the campaign trail by openly railing against Merkel’s euro policy, charging she had “failed to plot a clear strategy” over the last 18 turbulent months.

This came after the FDP leader, Economy Minister and Vice-Chancellor Philipp Rösler, repeatedly defied Merkel last week by speculating about an “orderly default” by debt-mired Greece, sending the euro into a tailspin.

The influential weekly Die Zeit said that the FDP was playing with fire by taking a strong anti-bailout line.

“It would be disastrous for Rösler if the eurosceptics prevailed (in the FDP). It would probably be the end of black-yellow,” it wrote on its website Friday, referring to Merkel’s centre-right coalition.

Meanwhile the Social Democrats, the biggest opposition party at the national level, hope the Berlin vote can give it a boost on the road to the 2013 general election.

The 57-year-old openly gay Wowereit has run a smooth, gaffe-free campaign for a third term in Berlin, Germany’s most populous city where 2.5 million voters are called to the polls.

He is currently in a coalition with the far-left Left party but may end up this time with the resurgent Greens, who have surged in popularity since Japan’s Fukushima catastrophe in March due to their anti-nuclear stance.

Their candidate Renate Künast, a tough former federal minister, aimed to take over city hall but has proved an erratic campaigner.

At least in terms of the electoral arithmetic, Wowereit could also end up in a tie-up with Merkel’s conservatives, who have lost five of six regional votes this year.

“Only the coalition negotiations will show with whom we can implement the most Social Democratic policy,” he said.

Backers say Wowereit has helped turn Berlin’s weaknesses into strengths, famously calling the cash-strapped capital “poor but sexy” for attracting hordes of tourists and creative types to one of Europe’s most affordable cities.

But with a 13-percent jobless rate — nearly double the national average — and a staggering €62 billion mountain of debt more than two decades after the Berlin Wall fell, critics say the city needs a major economic overhaul.