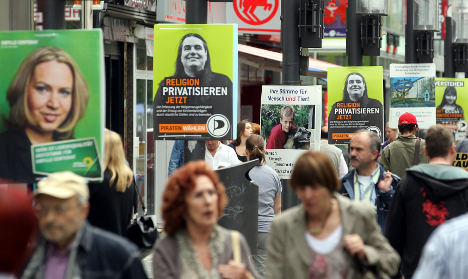 A poll published on Friday taking the political temperature of voters in the German capital showed the centre-left Social Democrats (SPD) stable on 31 percent, followed by the conservative Christian Democratic Union (CDU) on 22 percent.

The poll, conducted for the Berliner Kurier newspaper and the Berliner Rundfunk 91.4 radio station, suggested that Wowereit’s ten-year coalition with the socialist Left party, could be at an end, with the latter only securing 12 percent of support.

The environmentalist Greens, who at one point even topped 30 percent and were eyeing the mayoral office, have lost significant support in recent months, dropping to 18 percent. Yet they remain strong enough to offer the best coalition possibility for the SPD.

The Greens’ candidate for mayor, Renate Künast, is a relative heavyweight as a former federal consumer affairs minister, but has seen her election drive flounder after making a number of missteps early on.

Künast herself has proved an erratic campaigner in Berlin, her cool concentration on policy rather than personality contrasting unfavourably in the eyes of many with the more affable Wowereit.

The Kurier said that although the Greens had the best chance of replacing The Left as junior coalition partner, they were haemorrhaging support to the Pirate Party, a new political grouping focusing on civil liberties, as well as privacy and technology issues. The paper said 28 percent of its supporters would vote Green if there were not Pirate Party.

The Pirates now seem likely to send at least one representative to the state parliament, with support at nine percent, easily clearing the five-percent hurdle for representation.

The pro-business Free Democrats (FDP), however, seem doomed not to get seats in parliament, bumping along at just two percent. This would seal the fate of the CDU to remain in opposition, particularly after the Green’s recent statement that they would only consider forming a coalition with the SPD.

A continuation of the SPD-led government in Berlin would make no material difference to Chancellor Angela Merkel, but it is expected to be interpreted as a further state election setback for her centre-right government of conservatives and the FDP.

Voters have repeatedly punished Merkel’s Christian Democrats this year, in part over her tentative handling of Europe’s debt crisis and squabbling in her coalition, leading to losses in support in five of seven state polls.

Merkel’s junior coalition partner the FDP, already determinedly remaining out of line over euro-related policy, would have to absorb the embarrassing blow of losing all representation in the capital city. Having recently decided on a young leadership under Economy Minister Philipp Rösler, the party could become less dependable coalition partner, according to some observers.

The chancellor needs to rally coalition support ahead of a crucial eurozone rescue package vote at the end of September, amid fears of a backbench revolt in the Bundestag lower house of parliament, which could threaten her own majority.

At the end of a “marathon” series of election this year, Berlin’s poll “will have a symbolic impact with the reinstatement of a Social Democrat in the capital,” said political scientist Gerd Langguth of the University of Bonn.

Merkel, whom Forbes magazine last month named the world’s most powerful woman, has seen her popularity at home steadily erode due to accusations of weak leadership.

She has slipped to fifth place in the ranks of Germany’s politicians after becoming the most popular chancellor of the post-war period during her first term 2005-2009.

Langguth said Merkel nevertheless looked set to ride out the turmoil until the 2013 general election.

“Merkel has solid nerves, she can continue to govern,” Langguth said, adding, “It is not unusual for a government to be sanctioned (by voters) at mid-term.”

The pressure at the polls will also let up next year with only a sole election, in the small northern state of Schleswig-Holstein, slated for 2012.

In Berlin, the campaign has been dominated in the final stretch by rising rents in what has long been one of Europe’s most affordable capitals, making it a haven for both those seeking alternative lifestyles and tourists.

The city which was divided for 28 years by its despised Wall has become one of sharp contrasts. While gentrification has spruced up blighted neighbourhoods, the unemployment rate remains at 13 percent versus seven percent across the country.

It also has a large immigrant population – about 13.5 percent – including the largest Turkish population outside Turkey.