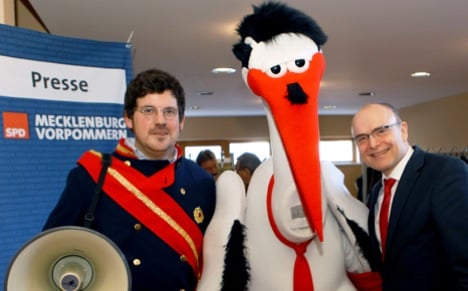 Storch Heinar’s co-creator is the state legislator Mathias Brodkorb, a member of the centre-left Social Democratic Party, who have adopted the stork as part of their campaign for the northeastern state’s election on September 4.

He says the Storch Heinar posters, a lampoon of the fashion label popular among right-wing extremists Thor Steinar, have been ripped down all over the state’s largest city Rostock.

Political scientist Gudrun Heinrich of Rostock University believes satire is always an effective strategy against the far-right. “Humorous initiatives particularly annoy them, because they don’t know how to deal with them,” she said.

Gudrun believes humour is something that requires empathy, something which extremists generally lack.

“They just feel annoyed by my stork,” offers Brodkorb, but he says the cartoon has also received a positive reaction wherever it’s been put up. Campaign helpers told him that passing drivers honked their horns stuck their thumbs up when they saw them putting up the posters.

The 5,000 posters, which feature Storch Heinar and the slogan “Stork Power, not NPD,” have been put up right next to NPD posters wherever possible.

Brodkorb said there was no danger that people would mistake his stork for actual NPD posters. “Satire can always be misunderstood,” he said. “But people won’t be more likely to vote for the NPD because they see a stork with a Hitler-moustache on a poster.”

Storch Heinar has now developed into one of the most successful anti-far-right campaigns in the whole of Germany, with a range of flyers and badges.