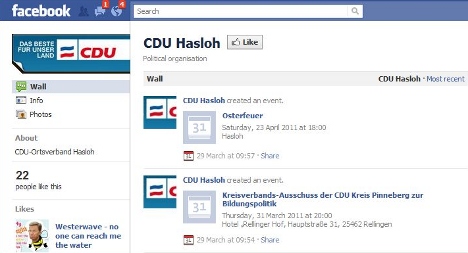 After a spate of widely reported crashed party involving hundreds or thousands of rowdy kids, the CDU chapter in Schleswig-Holstein was left red-faced after thousands of Facebook users signed up to attend what was meant to be a private event, the daily Hamburger Abendblatt reported on Wednesday.

The Hasloh branch of Chancellor Angela Merkel’s conservatives had planned a small, intimate party on August 20. But local chairwoman Dagmar Steiner put the invitation on Facebook and neglected to click the box marked “private event.”

The result was that the invitation was visible to all Facebook users. Thousands of people across Germany accepted the invitation. On Tuesday afternoon, the Hasloh CDU announced it had cancelled the party.

Complicating the matter is that the branch was for some time unable to announce the cancellation on Facebook or even remove the invitation because Steiner has been on holiday abroad and only she knows the password to the branch’s page on the social networking site, the Abendblatt reported.

“We’ve tried everything but we haven’t been able to reach her yet,” said Michael Witt, the vice chairman of the branch. “In a week, Ms Steiner is back again!”

Meanwhile, the invitation remained online and RSVPs were piling up by the day. After several news websites reported on the mistake, the fan community for the invitation grew, with some pranksters even posting travel directions and train connections to reach the party.

On Wednesday the branch’s page appeared to have successfully removed the invitation though it was full of tongue-in-cheek lamentations about the cancellation.