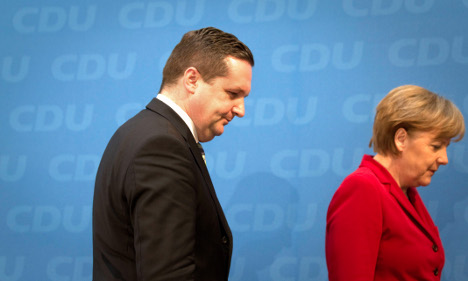 Stupidly for Angela Merkel, it wasn’t the economy.

On Sunday, voters ousted Chancellor Merkel’s conservative Christian Democrats (CDU) after nearly six decades in power in Baden-Württemberg. Home to both global players like Daimler and countless smaller companies making high-quality goods for China and the rest of the world, the southwestern German state is booming.

Essentially enjoying full employment, it’s a conservative, industrious part of Germany with a reputation for Spießigkeit – that is, being bourgeois, uptight and staid. Hardly the place you’d expect to be ripe for political revolution.

But that’s exactly what happened in a regional election likely to have national implications for both Merkel and her beleaguered coalition cohort Guido Westerwelle.

Some observers even expect Westerwelle, Germany’s foreign minister and vice chancellor, will soon have to give up the leadership of his pro-business Free Democratic Party (FDP) after it was pummelled in Baden-Württemberg and turfed out of the Rhineland-Palatinate state legislature in another election on Sunday.

Merkel’s position in the CDU, on the other hand, looks secure, but there is already growing internal criticism that she has shaved off too much of the party’s conservative profile in a vain attempt to pander to voters.

To top off the political sensation, the environmentalist Greens are set to have their first state premier – Winfried Kretschmann – after edging out their likely coalition partners, the centre-left Social Democrats (SPD) in Baden-Württemberg. (Though surely little solace to Merkel’s conservatives, the SPD now faces the unsavoury proposition of playing second fiddle to the Greens across the country.)

Yes, the nuclear disaster in Japan and Germans’ deep abhorrence of atomic energy played a big part in the Greens’ success on Sunday. But, to be honest, Baden-Württemberg was an election that was lost by the CDU rather than won by the Greens.

Merkel’s unpopular decision to extend the use of nuclear power last October and her clumsy reversal in the wake of the Fukushima catastrophe certainly turned many voters against her party. But the Greens also profited from the months of protests against the controversial Stuttgart 21 rail project, which essentially mobilized and energized its base over several months.

After buttoned-down Swabian pensioners started taking to the streets of Stuttgart, it was clear Baden-Württemberg’s outgoing conservative premier Stefan Mappus was out of touch on issues that mattered not just to tree-hugging Greens.

Now Kretschmann will have to show that he’s got a better handle on the concerns of the state’s doughty residents while keeping Baden-Württemberg successfully humming along.

But as Merkel now knows, it’s not just the economy, stupid.