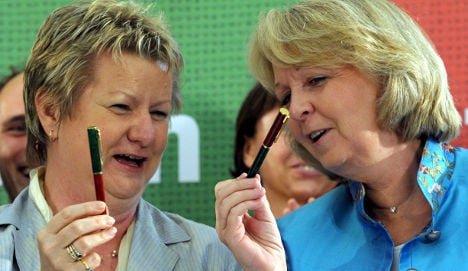 Social Democratic (SPD) leader in Germany’s most populous state, Hannelore Kraft, is set to be elected as the head of the minority government in a coalition with the environmentalist Greens, against the opposition of the conservative Christian Democrats (CDU) and pro-business Free Democrats (FDP). The socialist Left party has said it would abstain in the vote.

The vote will end nine weeks of political shifting and deal-making since the state election produced no clear winner. Countless coalition combinations were discussed, but each ended in stalemate until the “red-green” minority government appeared to be the only option – albeit a weak one.

To pass legislation, the red-green coalition will need to scrape together some votes in the state parliament – either from its left or its right – meaning it will need to make deals or risk a parliamentary deadlock.

Chancellor Merkel told daily Rheinische Post that Kraft had repeatedly stressed during the campaign that the state needed a strong, stable government.

“Now she will start work by massively breaking her word. You can’t trust such a government,” Merkel said.

Merkel also blasted the red-green coalition’s plan to hike the amount of new debt the state would take on.

“That will ruin the finances of the state of NRW,” she said. “That has nothing to do with generational equity.”

Free Democrats leader and Vice Chancellor Guido Westerwelle told the Hamburger Abendblatt the coalition in the western state was a trial run for a coalition with the socialist Left party at the federal level – a controversial match given many voters are wary of the Left’s more radical national policies.

“The debt coalition of SPD and Greens in Düsseldorf, supported by the Left party, will be a test run for Berlin.”

He added that the minority government could not expect the support of the FDP.

“The SPD and the Greens want (UK-style) comprehensive schools. That is not compatible with the Liberals’ position. We want a streamed education system (in which students are grouped according to academic ability),” he said.