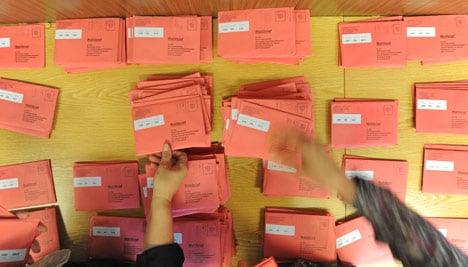 Sunday’s election in Germany’s most populous state could reshape the country’s political landscape. A loss for the governing centre-right coalition of the CDU and its junior partners the pro-business Free Democrats (FDP) would inevitably be seen as a vote of dissatisfaction with Merkel’s federal coalition, which has been struggling amid internal squabbles and a seeming lack of direction.

Such a loss could also strip the government of its majority in the upper house, or Bundesrat, which represents Germany’s 16 federal states.

Though the tension is high for the politicians involved, the state party campaigns have left voters cold, according to head of the Mannheim-based research group Wahlen, Matthias Jung.

“The election on May 9 isn’t particularly electrifying for the citizens of North Rhine-Westphalia,” he said. “The polarisation between the two parties isn’t especially strong.”

Current CDU state premier Jürgen Rüttgers – whose party has recently been plagued by a succession of political scandals – and his opponent, Social Democrat Hannelore Kraft, “enjoy no overwhelming esteem among voters,” he added.

This combined with a trend toward lower turnout at state elections means that just 55 to 60 percent of the state’s voters will turn up at the polls, Jung predicted.

Meanwhile sinking poll approval for the CDU could make it difficult for the conservatives to form a coalition in the state.

The party lost two points of support to reach a 34 percent in a recent poll conducted by Forsa for news magazine Stern and broadcaster RTL. With the FDP at eight percent, the two parties will likely not be able to gain the majority of seats to form a coalition.

Kraft has said she does not want to form a coalition relying on The Left, however, she has not completely ruled out a three-way coalition with the leftists and Greens.