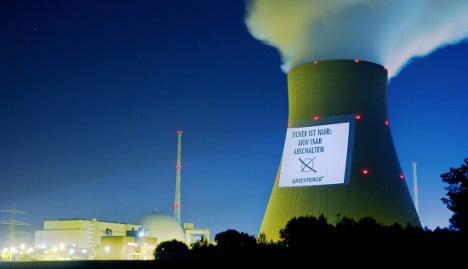 The world’s worst nuclear accident at Chernobyl in 1986 turned a large part of German public opinion against atomic nuclear power, and in 2000 the government of Gerhard Schröder decided to mothball all reactors by 2020.

Shipments of radioactive waste from nuclear plants to a processing plant in Gorleben in western Germany regularly attract huge protests, and Germany has no permanent storage site.

Currently, Germany’s 17 reactors supply almost 30 percent of its electricity, with coal and gas producing more than 50 percent and renewables such as solar and wind power some 12 percent.

Germany is uneasy about volatile gas and oil imports from Russia and the Middle East, and wants to be at the forefront of global efforts to reduce carbon emissions ahead of a crunch UN climate summit in Copenhagen in December. As a result, Berlin has set some ambitious targets. By 2020, the country aims to cut its carbon emissions by 40 percent compared to 1990 levels, and to have renewables produce a third of Germany’s power needs in the same timeframe.

But Merkel’s CDU/CSU conservatives and their new coalition partners, the Free Democrats (FDP), believe the life of some of the nuclear plants should be extended, forming what she calls a “bridge” until renewables can fill the gap.

And fresh from her victory, Merkel on Monday vowed to press ahead with what her party had promised, telling reporters: “I don’t intend today to go back on what was in our election campaign.”

It is clear, however, that they will have a struggle on their hands, with a parliamentary head of the Greens, Renate Künast, vowing that the party would oppose a nuclear U-turn both in parliament and with demonstrations.

Künast, whose party was in coalition with Schröder’s Social Democrats (SPD) when the nuclear exit was approved by parliament, told the Leipziger Volkszeitung on Monday that opposing any change was her “top priority.”

Frank-Walter Steinmeier, the SPD’s chancellor candidate who wants to become the party’s new parliamentary head, said on Sunday night that he also would fight any reversal tooth and nail.

“If they do it, they will open a whole can of worms in German society again, it is clear,” Edler told AFP. “People will go out on the streets, there is no other option.”

Fellow pressure groups Ausgestrahlt and BUND agreed: “If the new government intends to bow to the demands of the nuclear lobby, then they should expect stiff resistance.”

“We are ready for talks. But for now we are just going to wait and see what happens,” a spokesman for ENBW said.