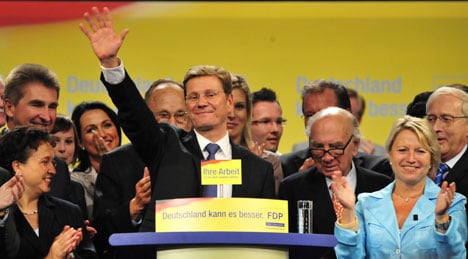 The motion, agreed to at a party congress a week before the election, said the FDP “wants to form a government” with Merkel’s conservative Christian Democrats (CDU).

It said that the electoral programmes of the other possible partners, the Social Democrats (SPD) and the ecological Greens, “would lead to greater burdens on citizens.”

“We, as Free Democrats, are not prepared to forming a majority with” the centre-left SPD and environmentalist Greens, FDP chief Guido Westerwelle said at the party congress in Potsdam near Berlin.

Opinion polls suggest that Merkel might be able to ditch the SPD, her current partners in the unwieldy “grand coalition,” and win a majority in parliament with the FDP. But the SPD’s ratings have improved in recent days, and surveys suggest that a considerable number of voters are still undecided, raising the possibility of an upset.

If the CDU and the FDP fail to win enough votes, the CDU would most likely form another with the SPD for another four years, commentators believe.

Other constellations are in theory possible, however, such as a so-called “traffic light” coalition of the SPD, the FDP and the Greens, even though the FDP’s new motion rules this out.

“We will stick to our word,” Westerwelle said. “You can count on us, we have proved it.”

The Greens, meanwhile, have ruled out forming a government with the CDU and the FDP – dubbed a “Jamaica” coalition because of the colours of that country’s flag. The Greens’ preferred partners are the Social Democrats, with whom they governed between 1998 and 2005 with Gerhard Schröder as chancellor.

Opinion polls indicate that the SPD and the Greens lack the necessary support, however, and both have ruled out working with the fifth main party in the German parliament, the socialist party The Left.