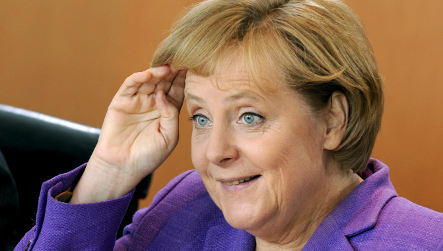 Who me? Photo: DPA

Asked to choose between Merkel and her rival for chancellor, Foreign Minister Frank-Walter Steinmeier, 58 percent would choose her, the survey found. Only 17 percent said they would vote for the beleaguered Steinmeier, the survey said.

The chancellor’s centre-right Christian Democratic Union (CDU) also gained two points to hit a 2009 high of 38 percent. In Germany, voters cast ballots for their party of choice rather than the candidate.

Steinmeier’s Social Democratic Party (SPD) again failed to make up any ground and was stuck at 23 percent.

After the September 27 elections, Merkel aims to ditch the SPD, which currently governs with her CDU in an uneasy grand coalition, and form a government with the liberal Free Democrats (FDP), whose support dipped to a year-low of 13 percent.

Despite the Free Democrats’ decline, the poll indicated that Merkel would likely clinch a ruling majority for her hoped-for coalition.

Among the other main political parties in Germany, the poll showed the Greens would gain 12 percent of the vote and the radical “Left” party nine percent.

Manfred Guellner, the head of the Forsa Institute, which conducted the poll, said Merkel’s continued popularity was due to an improvement in the economic mood in Germany.

The poll, published by Stern magazine and television channel RTL, surveyed 2,502 voters between July 20 and July 24.