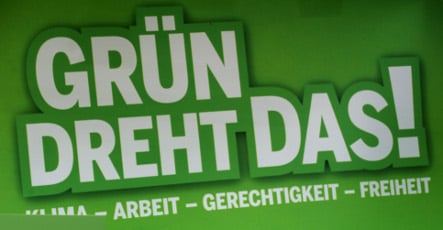 After one term in the European Parliament, Berlin Green party candidate Michael Cramer suffers from a painful conscience over his MEP’s flight schedule, which he tries to balance with a yearly donation to a climate protection charity. A discussion with the transport expert and his ambitions for Europe.

The Local: Why do you set so much store by your flagship project, the Iron Curtain Cycle Trail?

Cramer: When the Berlin Wall fell, the other major parties wanted to erase all traces of it, as if they wanted to erase history. But under the principle ‘Only those that know their past can master their future,’ the Green party worked towards preserving parts of it in the early 90s. At the time people said the Greens want to build the Wall again, now everyone is glad these remnants are still there. We want to extend the idea to the whole of Europe. The European Greens have campaigned in the 14 EU states on the Iron Curtain – it’s a vivid way of unifying history, politics and different cultures.

The Local: The SPD has run a fairly negative advertising campaign in Berlin, and the Greens are the only major German party they haven’t attacked. Do you have a common agenda with the SPD?

Cramer: Well my first reaction is ‘What can they attack us on?’ And secondly, a party that can only run a negative campaign obviously doesn’t have any content to promote. For example property tax – who stopped the increase being introduced in Germany? In the USA, France, Britain, everywhere – there’s a lot more property tax than in Germany, but the SPD stopped it – that’s an issue they have to resolve. They’re probably not going to get a majority, so they’re going to have to see who they can form a coalition with.

The Local: What about the Greens?

Cramer: Well, we obviously have our issues to get across. We are the only major party that has a European-wide project – the Iron Curtain Trail. We are the only party with a European election programme – where we address every EU member state. We are also the only party that focuses on European issues. The three major crises – the economic crisis, the climate crisis and the energy crisis – can only be defeated internationally. If we didn’t have the EU today we would have to create it.

The Local: In the EU Parliament you sat on a temporary committee for climate change for two years. What good did it do?

Cramer: The problem was we could only adopt positions. They were very interesting, but we had no power to make any laws. That’s a special disadvantage because more than 80 percent of environmental law in Germany comes from Europe, so these committees would make more sense if they had that power. But the EU wanted to make a point with this committee, and I don’t want to bad-mouth that. It was important, but the questions it asked in 2007 are at least as important today. Every day that we wait costs an extra billion. And then in Germany they bring in this idiotic car scrapping bonus, which has absolutely no ecological value. Suddenly the money is there, and its thrown into the wrong projects. It’s crazy.

The Local: So was the committee a frustrating experience?

Cramer: No it was very interesting. Even though transport accounts for 30 percent of CO2 emissions, it receives billions in subsidies. It was important for me to understand the ecological dimension of this. I would have liked to have seen more of the members of the transport committee there, but only a few came.

The Local: The Green party is one of the few parties that gets recognised on a European level, since almost every country has one. Is this an advantage in the election?

Cramer: We’re the only really European party. A lot of the other parties like to wear their national glasses, even in Europe. I often notice that parties can’t separate national and European issues. When the Left party get annoyed that there’s no minimum wage in Europe, for example. That’s the wrong question to ask. Twenty-two member states have a minimum wage, Germany doesn’t. We could introduce it any time.

The Local: What have you learned in your first term in the European Parliament?

Cramer: A lot, because everything is different in a national parliament. We don’t play the old government-opposition game. We see ourselves as a parliament, solving problems together. And of course it’s exciting seeing what things are like in other countries. I think it’s great.