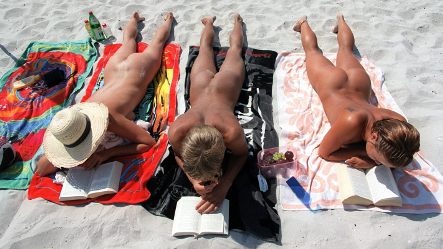 Not the swinger party you're looking for. Photo: DPA

Aschau beach, near the resort town Eckernförde in the German state of Schleswig-Holstein, is just hidden from view along the B76 motorway and has long been a popular Freikörperkultur (FKK), or nudist, swimming site. But last summer, it somehow became a magnet for a more hardcore set of visitors who began having swinger parties. This then drew voyeurs, but Marohn said non-swingers had also been confronted by the outdoor sex.

“There have been involuntary witnesses to sexual acts, and normal women just walking their dogs along the nearby path were approached and told to remove their clothing,” Marohn explained. “There are only about 300 people in our community, but there were enough complaints that we knew it was not a coincidence.”

Initially residents thought the excitement would die down, but a warm start to the spring brought more unwholesome activity to the beach.

On April 20, local authorities met and concluded that the problem warranted attention from the Office of Public Order (Ordnungsamt). Now those caught in the act face fines.

In their first visit to the beach, officers took down personal information from three people, Marohn said. He added that they’d be back when the weather improves to see if the initial operation had made an impact on activity.

News magazine Der Spiegel reported Monday that some FKK enthusiasts have said the shallow waters off the beach aren’t good for swimmers anyway, which gives it other “advantages.” But Marohn, who has served as Altenhof mayor for 22 years, said the beach is ideal for families with small children, who need protection from “optical harassment.”

“This is not an attack on the normal, totally harmless FKK that has been tolerated in the area for years,” he said. “We are not prude. This has to do with activities like gang bangs that then get posted on the internet – we cannot tolerate this.”