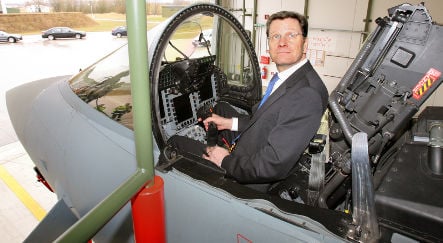 Guido is ready to eject out of this parliament. Photo: DPA

Pointing to growing strife within Chancellor Angela Merkel’s uneasy right-left coalition, Westerwelle suggested German voters pick a new national parliament on the same day they will head to the polls for European elections.

“If the government can’t or doesn’t want to get back to business then it should clear the way for us to vote for the German Bundestag on the same day as European elections,” he told public broadcaster ZDF.

Whereas Germany’s general election is scheduled for September 27, voters will elect a new European Parliament on June 7. With the FDP currently riding high in opinion polls, Westerwelle would likely benefit more than most politicians from an early election.

But Merkel’s so-called grand coalition of conservative Christian Democrats (CDU) and centre-left Social Democrats (SPD) has begun to fray in recent weeks, as both sides begin to position themselves for the upcoming election campaign.

Horst Seehofer, the head CDU’s conservative Bavarian allies the CSU, on Saturday said the SPD should leave the government if it had a problem with the direction it was heading.

“If the SPD doesn’t like it in the grand coalition anymore than the CSU won’t stand the way of their departure,” Seehofer said at a party conference in Erlangen.

But in a televised interview on Sunday evening, Merkel discounted throwing in the towel early.

“I as chancellor will fulfil my obligations in this coalition for the period that we’ve been elected,” she said. “I can only recommend others do the same.”

And SPD chairman Franz Müntefering also said over the weekend the Social Democrats would stick it out until this autumn: “We’ll torture (Seehofer) as long as we can – until the very last day of this legislative term.”