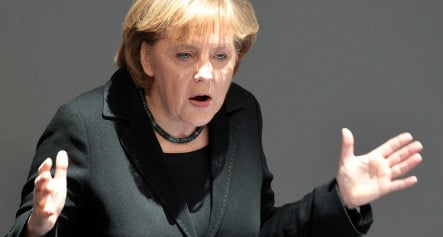 Speaking to parliament to outline her strategy for an upcoming EU summit in Brussels, Merkel rejected a growing chorus of voices that Berlin was not doing enough to combat the unprecedented economic downturn.

“We are in the vanguard. We are doing more than most,” she told the Bundestag.

Merkel said Germany had a particular interest in ensuring “the global economy gets back on its feet” due to its position as the world’s leading exporter. But she also warned against demands for further stimulus measures, which would be tantamount to a “competition of promises.”

Germany has already passed two separate stimulus packages worth €80 billion, however, many economists and the US government would like the world’s fourth largest economy to do even more.

But in a sign that Merkel’s uneasy right-left government was beginning to fray around the edges as this autumn’s general election nears, the chancellor on Thursday also faced criticism of her handling of the economic crisis from her junior coalition partners the centre-left Social Democrats (SPD).

Ahead of Merkel’s address to parliament, leading SPD officials said she had failed to take action against the crisis within her own country, though her rhetoric on the international stage had been strong. SPD politicians are particularly miffed that Merkel’s Christian Democratic Union (CDU) has supposedly hindered efforts by Finance Minister Peer Steinbrück (SPD) to put pressure on tax havens and reform rules in job centres for the unemployed.

“No national address and no series of summits helps when one doesn’t do one’s part as soon as things get concrete and serious,” SPD party chairman Franz Müntefering said, adding that failing to address the tax haven issue was unacceptable. “If the CDU continues these tactics, there will be trouble.”

“If the fight against tax frauds is going to me more than just a flowery phrase, we need more international pressure,” he said.

“Those who suggest international action must also implement them at home,” he added, saying that the financial crisis “requires brave leadership.”