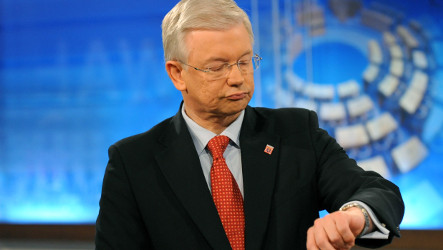 Last year, the particular brand of political chaos seen in the state of Hesse – home to the Germany financial capital Frankfurt am Main – led to the coining of the phrase “Hessian conditions” in the national media. An inconclusive election at the start of 2008 left the five parties in the state legislature unable to form a government and the bumbling of the state’s politicians became notorious across the country.

The conservative incumbent premier Roland Koch ran a campaign that alienated Hessian voters with its thinly veiled xenophobia, but the centre-left Social Democrats (SPD) also came up short in their bid to forge a coalition with their preferred partners the environmentalist Greens.

The SPD’s leader in Hesse, Andrea Ypsilanti, then proceeded to make decision that would leave her political career in tatters – she attempted to oust the unpopular Christian Democrat Koch by cobbling together a minority government that relied on the hard-line socialist party The Left. The only problem was she had promised during the campaing not to work with the leftists and her grab for power was eventually sabotaged by her own backbenchers.

That meant voters in Hesse had to go back to the polls on Sunday and this time Koch managed to emerge victorious – if not a winner. The conservatives were unable to improve their share of the vote at all, but Koch’s coalition partners the pro-business Free Democrats surged ahead, ensuring the unpopular caretaker premier will get another chance to earn a place in Hessian hearts.

The SPD suffered a defeat of historic proportions – but they’re selling their loss as a moral victory. The Social Democrats will now be rid of Ypsilanti after she announced her resignation as party leader and they were also heartened by the performance of their new point man in the state, Thorsten Schäfer-Gümbel. He saw his bid to become premier go down in flames yet was commended for beating admittedly low expectations for someone virtually unknown in the state a few weeks ago.

It’s all a bit too confusing for even the biggest political junkies in Germany, and that chaos was reflected in editorials in the country’s major papers on Monday.

“That was a strange state election,” wrote left-wing daily Tageszeitung, arguing that Hesse might have gotten a government, but its voters were no less perplexed than they were a year ago. “The loser has been strengthened and the victor weakened. A quarter of a year ago, Thorsten Schäfer-Gümbel was best known for the fact that nobody knew him. Now he’s considered the saviour of the Social Democrats.”

The paper also said Hessians punished the Social Democrats for the past year of political limbo, but that didn’t mean they rewarded the conservatives: “The populace certainly hasn’t discovered a newfound passionate love of Roland Koch.”

The conservative Frankfurter Allgemeine Zeitung focused on the stellar performance by the Free Democrats (FDP), who garnered some 16 percent of the vote in Hesse and now have extra weight in the upper house of parliament to stymie Chancellor Angela Merkel’s federal government.

According to the paper, her Christian Democrats “have lost much of their bourgeois profile during their grand coalition with the SPD.” Merkel, who would prefer to ditch the SPD for the FDP after this autumn’s general election, will have to distance the conservatives from current centre-left coalition partners to keep the Free Democrats from poaching their voters, wrote the FAZ. “The CDU still doesn’t have an answer to the strengthening of the FDP. But does the FDP already know what it wants to do with its new power?”

The centre-left daily Süddeutsche Zeitung called the results of the latest election in Hesse “the bill for Ypsilanti’s stupidity.” Arguing her resignation came too late, the paper said the Social Democrats’ woes in the state once known as “Red Hesse” were a sign of the problems they face nationally.

“The SPD no longer has any state strongholds. Hesse was once the classic SPD state. Now it’s clear just how ruined this party really is,” wrote the Munich-based daily. “State elections have produced odd end results lately: Bavaria recently ended up with premier that nobody voted for and now Hesse is getting one that nobody (even though they voted for the CDU and FDP) really wants.”